Bulldogs close out Classic with a win

The Pike County Bulldogs concluded the Capital City Classic on Friday afternoon with a 57-36 win over Calhoun.

The win gives the Bulldogs a 2-1 record in the tournament after losing to Bullock County 44-39 in game one and defeating Alabama Christian 71-41 in game two.

“Over the last three days, I thought we got a lot better,” said Bulldogs head coach Doug Holland. “We saw different styles from different teams. We got to play three games after only playing five this season. I thought that helped us out a lot.”

On Friday the Bulldogs were able to race out to an early lead and they kept it throughout.

“We talked this morning about not playing the scoreboard and play the game,” Holland said. “We were able to turn them over and get back into transition a lot better. Once we got the lead we stayed poised on the floor and we kept our intensity up.”

The Bulldogs jumped out to a quick 18-10 lead in the opening quarter. Jahzarian Lampley and Jaidyn Wilson both got off to hot starts by scoring six points a piece in the opening frame.

The defenses started to gain control of the game in the second quarter as the teams combined to score just 20 points and the Bulldogs went into halftime holding a 31-17 lead over the Tigers. Lampley led the Bulldogs in the first half by scoring 10 points.

In the third quarter, the Bulldogs took a very comfortable lead after outscoring the Tigers 18-4 and took a 49-21 lead into the fourth quarter.

From there the two teams would play with a running clock and the Bulldogs were able to finish off the win with eight fourth quarter points.

“We started to spread out on the perimeter,” Holland said. “Once we got the lead on them, we knew they were going to try to shoot threes. We talked about extending out and rotating down.”

At the end of the game, Bulldogs Juhmir Lampley was named to the All-Tournament team.

“I was excited for him. It’s a very nice award,” Holland said. “I talked to him about being a leader, I don’t think anyone on the team has played more games than he has. He did that and he played well during the whole tournament.”

The Bulldogs will be back in action on January 3 when they begin area play against Daleville. 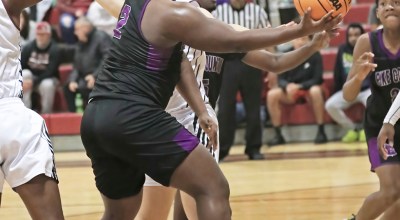