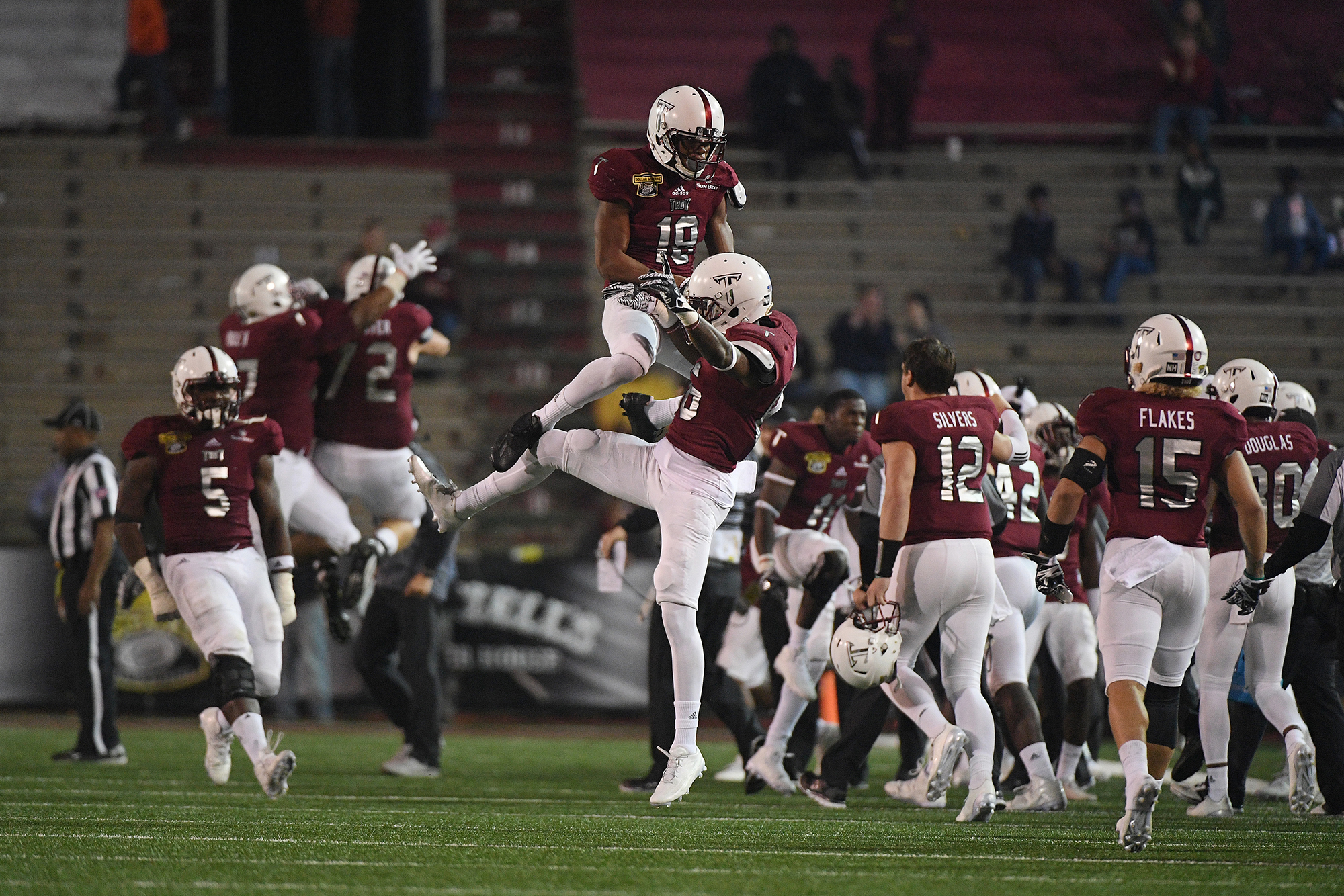 MOBILE – The Troy defense forced five turnovers as the Troy Trojans picked up a 28-23 win over the Ohio Bobcats in the Dollar General Bowl.

The win gives the Trojans (10-3) there first 10-win season in Division I history.

“Tonight was a microcosm of our season,” said head coach Neal Brown. “It wasn’t always pretty and we have won in a lot of different ways. Tonight we came out, and we were in a flow and then we came at them with yardage with penalties. This is a big win. This is the first time in our FBS history that we have won 10 games and that is something that 16 seniors on our football team will always be proud of.”

The Trojans began the game in historic fashion. After the defense held the Bobcats to a three and out, Jordan Chunn rumbled his way from one yard out giving him his 35 career touchdowns, the most in Troy history.

The first half was full of turnovers as both teams combined for six turnovers, five of which came on interceptions. The Trojans were able to capitalize off the Bobcat turnovers by turning them into 14 first half points.

“It was huge,” Brown said. “In these bowl games, very seldom do you see clean football games. We won the turnover margin, and we were able to turn three of them for touchdowns … Without a doubt our defense set the tone.” 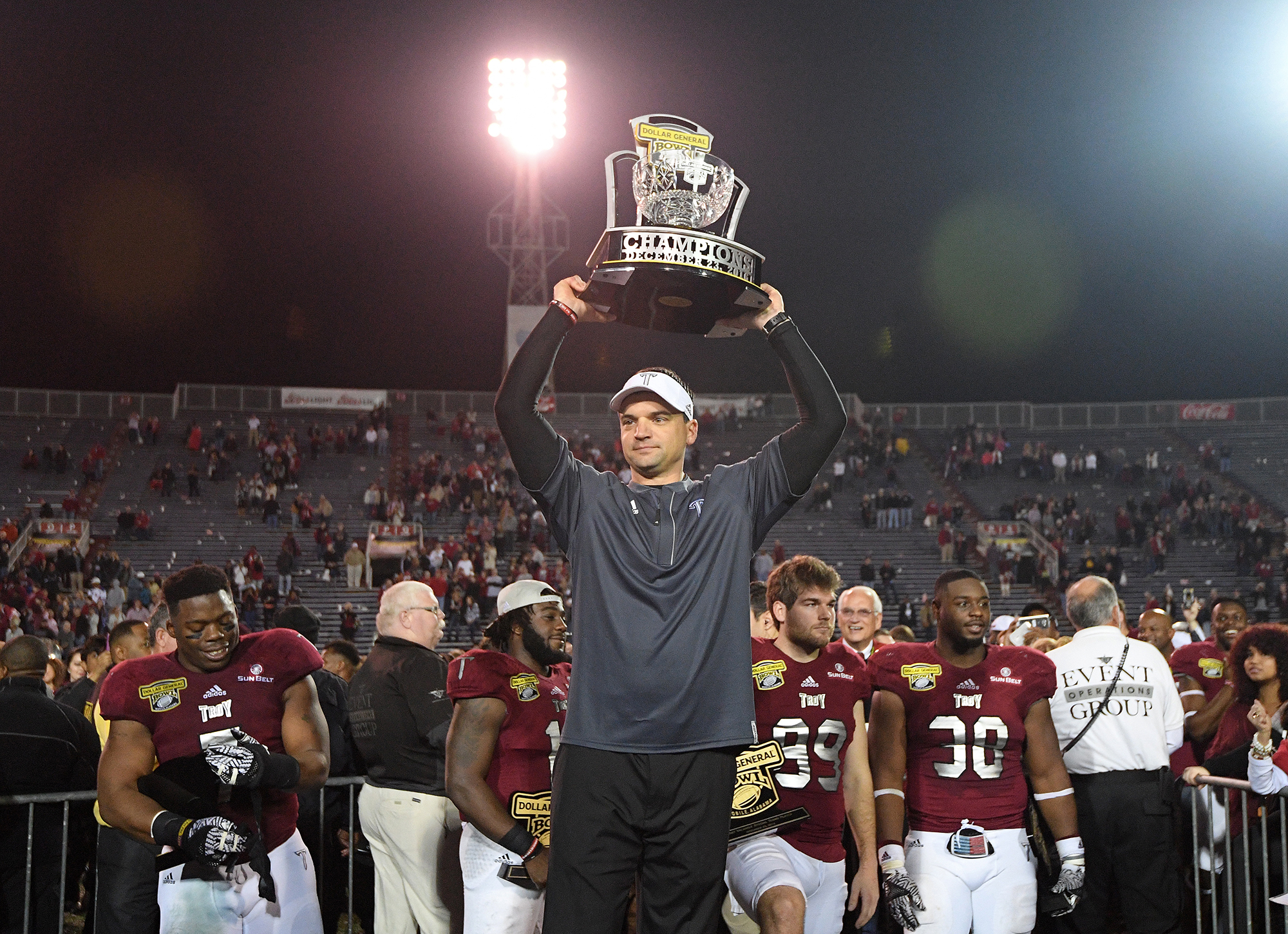 Cedarius Rookard hauled in the first interception of the half giving the Trojans the ball. Quarterback Brandon Silvers gave the ball right back when he threw an interception giving the Bobcats the ball on their own one-yard line. They marched 99 yards and tied the game on a 45-yard touchdown completion by Papi White to even the score at 7-7.

Following Chris Weatherspoon’s first interception, Troy embarked on a an 11-play drive that was capped by a three-yard touchdown run, once again by Chunn giving him his 15th touchdown this season. Troy led 14-7 heading into the second quarter.

The Trojans had a chance to add to their lead after Seth Calloway recovered a fumble, but after the drive stalled kicker Ryan Kay missed a chip shot 20-yard field goal.

Louie Zervos connected on his attempt from 33-yards out to bring the score to 14-10 in favor of the Trojans with 13:20 remaining in the first half.

Emmanuel Thompson, who was said to be playing with a broken right arm, capped off a five-play, 18-yard touchdown drive when he caught an 11-yard touchdown pass from Silvers to increase the lead to 21-10 with 4:52 remaining in the half.

The Bobcats ended the first half on an 11-play drive and got to within four points once again when Jordan Reid caught a pass from Greg Windham to bring the score to 21-17.

“In the first half we were in a rhythm,” Brown said. “Defensively I thought we needed to settle down at halftime because we gave up some yards.”

The turnover bug bit the Bobcats in the second half. Defensive lineman Trevon Sanders picked up off Windham setting the Trojans up at the four-yard line.

Five forced turnovers ties a bowl record for Troy and adds their to 22 interceptions on the year, second most in the country.

Chunn capitalized and scored his third touchdown of the game to give Troy a 28-17 lead and giving Chunn is first three-touchdown game of his career.

The strong leg of Zervos capped off a nine-play drive when he drilled a 47-yard field goal to bring the score to 28-20 with 3:22 remaining in the third.

Zervos had another chance to make it a five point lead for the Trojans but after the Bobcats went on a six play drive, he missed his 46-yard field goal attempt left and Troy preserved their eight point lead.

Not to be denied on back-to-back kicks, Zervos redeemed himself with a 37-yard field goal to bring the Bobcats to within five points with 4:01 remaining. The Bobcats had the ball inside the 15-yard line but a late hit personal foul backed them up, forcing them to play behind the chains. The drive lasted eight plays and spanned 36 yards.

The Trojans burned nearly two minutes off the clock but had to give the Bobcats possession at their 15-yard line with 2:20 remaining.

The Bobcats were able to pick up a first down, but the Trojan defense stood tall and clinched the Dollar Bowl championship.

Fresh of breaking his arm in the season finale, Thompson led the Trojans with eight catches and he finished with 83 yards and one touchdown.

“He is tough,” Brown said. “He broke his arm against Georgia Southern on December third. He practiced a week ago Thursday.”

The Trojan win brings the Sun Belt Conference’s record in bowl games to 4-1 on the season with South Alabama still to play.

“I am very proud to represent the Sun Belt Conference,” Brown said. “That speaks to the level of play in our conference.”