More than a game: Trojan fans have a lot to look forward to when they make the trip south to Mobile 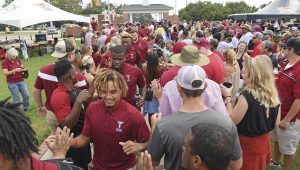 Photo/Thomas Graning
Fans that will be attending the Troy football game at the Dollar General Bowl on Friday will have a chance to partake in special activities such as a parade and pep rally if they make the trip on Thursday.

Trojan fans will have plenty to do in Mobile over the next two days other in addition to watching Troy play Ohio in the Dollar General Bowl Friday night.

The excitement level for the team’s first bowl game since 2010 continues to grow with each passing day.

“It’s been really good,” said Troy Athletic Director Jeremy McClain. “The excitement level is great, especially as we get a little closer and we get more people checking into their hotels.”

For fans making the trip down to Mobile a day early, they will have an opportunity to not only enjoy the company of Trojan fans in the hotel, but to partake in various activities.

“Really, Thursday is going to be the most exciting day from a fan perspective outside of the game,” McClain said. “We have a day full of events.”

Thursday’s schedule will include the Mayor’s luncheon, where former Florida and South Carolina head coach Steve Spurrier will address teams, their alumni and fans. There will also be a street party at historic Bienville Square followed by Mardi Gras parade through the streets of Mobile beginning at 6:30 p.m. Troy will close out the evening with a pep rally at the Bienville Square followed up by another street party at 8 p.m.

“We will have a pep rally, parade and parties going on within four or five blocks from our hotel,” McClain said. “It’s a great set up and it’s a whole lot of fun. If folks are thinking about coming I would encourage them to come on Thursday and have a good time with us.”

As of Wednesday morning, thousands of tickets have been sold to the Trojan faithful, but there are still plenty available. Tickets are $45 for sideline seats inside the 10-yard line and student tickets will be $15.

Troy University is urging Trojan fans to purchase tickets through the University to help increase their attractiveness for future bowl games.

“We have plenty of tickets, but we have been moving tickets at a steady pace,” McClain said. “It is very important that if folks are interested in coming that they go to our website or reach out to our ticket office and get them. It’s a big revenue piece for us as far as the bowl is concerned.”

Fans can still buy or pick up tickets through the University by going to the Renaissance Riverview Plaza Hotel Lobby in Mobile today (Thursday) between 1 p.m. and 5 p.m. or Friday from 10 a.m. until 4 p.m. They can also purchase tickets at Lad-Peebles Stadium, Gate 4-East.

Fans that attend the Dollar General Bowl are sure to experience a different atmosphere than the one they would experience during the regular season.

“It’s the festivities and atmosphere,” McClain said. “These bowls do a great job designing the festivities in a way that lends itself to a party outside the game. It’s going to be a great time and a great chance to get together as a Trojan family and celebrate what has been a really special year.”

Kickoff between the Trojans and Bobcats is set for 7 p.m. on Friday night.