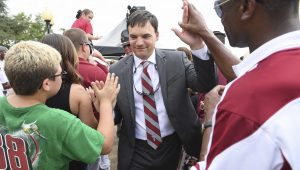 Photo/Thomas graning
The Troy Trojans will participate in their first bowl game since December 2010 when they take on the Ohio Bobcats this Friday night in the Dollar General Bowl at Ladd Peebles Stadium in Mobile.

The Troy Trojans will participate in their first bowl game since 2010 on Friday when they travel to Mobile to take on Ohio in the Dollar General Bowl.

For the fans, it’s about time.

A lot has changed since the Trojans were last in a bowl game. The Trojans also played Ohio that year, that time in the R&L New Orleans Bowl, and came away with a 48-21 victory.

Things took a downward turn from there, as the Trojans went 21-39 over the next five years.

Legendary head coach Larry Blakeney retired following the 2014 season, making way for Neal Brown to lead the Trojans back to the Promised Land in just his second year.

“As a fan it’s awesome,” said longtime Troy fan Jason Jones. “I have been waiting for this day for six years. I didn’t know where we were going, but I knew I was going somewhere. I am glad it’s finally here.”

“It’s special to be able to support the school that I went to and be with the team,” said fan Wes Grayson “When we have these good years when we can celebrate with a bowl game, its just really special to be an alumni and be a part of it.”

“At the beginning of the season we were looking at maybe being 6-6 or maybe 7-5,” Jones said. “We thought we would be in a bowl game somewhere, but Mobile is a great set up, it’s a perfect location to recruit in your rivals own back yard.”

Friday’s game will give fans the ability to have fun in a different environment. Troy played in Mobile following the 2009 season and fans packed the team hotel and enjoyed events such as the parade and team pep rallies. When Grayson heads down to Mobile on Thursday, he hopes to have a similar experience.

“I am bringing my kids along for their first bowl game,” Grayson said. “They are really excited to wear their Troy gear and be in the hotel with team and the fans. We are looking forward to seeing the team off from the hotel and then having a big Troy home field advantage in the stadium.”

The Trojans made the three-hour voyage south to Mobile in the regular season and they packed Ladd Peebles Stadium. Although it was a great experience, bowl season brings a little bit more excitement.

“It’s hard to explain, it’s different,” Jones said. “You see people at these bowl games that you wouldn’t see at home games. People jump on board and it’s a great spring board for a casual fan who can take time off and go and make a fun trip out of it.”

Last time Troy played in Mobile for a bowl game, Jones was in attendance to do radio work with announcers Barry McKnight and Jerry Miller on what was a blustery day on the bay. This year he will be more prepared to tackle the conditions.

“I am taking enough gear to take care of an Eskimo,” Jones said. “I helped Jerry and Barry with the radio call and we were set up in a stairwell and none of us were prepared. There was wind from the front and from the behind. It had to have been -25 degrees. I don’t know what it was, but that is what it felt like. Everybody will be prepared this year.”

There will be more than just football in Mobile. On Thursday night there will be pep rallies and a Mardi Gras Parade on the streets and Jones plans to attend both of them. He will also find some time to help with local economy when he does a little Christmas shopping.

“We will get down there in time for the parade and all the other festivities that Troy will be hosting,” Jones said. “That will be the first priority and then on Friday we will finish up some Christmas shopping and give a little boost to the economy in Spanish Fort.”

Fans like Jones and Grayson are hoping to head into Christmas with an extra reason to celebrate when Troy takes on Ohio beginning at 7 p.m. on Friday night.