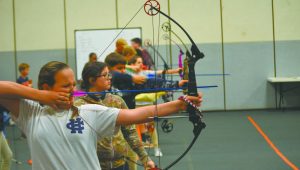 “I am extremely excited for our winners in all divisions,” said Forrest Lee, archery coach at TES. “We had more to compete in this tournament than our tournament in November. We are working hard to promote archery as an activity to participate in as it relates to our school system and other schools in this area of Alabama.”

Troy Students were not the only ones to compete in the tournament. Sarah Arthur of Goshen Elementary also competed, as well as archers from Floyd Middle Magnet School in Montgomery.

Archers shot at nine different targets that were nine to 15 meters away. Targets included a bobcat, bear, turkey, sheep, deer, coyote, squirrel, pronghorn and a goat.

There were four different age classes that had both a male and a female champion.

Beaux Mizell took home the overall championship with a score of 78. He also finished in the top spot in the boy’s fourth and fifth grade division, with Bryson Mizell finishing in second place with 77 points. Mary Hayden West took home the girls fourth and fifth grade championship with a score of 64 with Jesall Patel coming in second with 48.

In the sixth, seventh and eighth grade division Will Templin took home the crown with a score of 68 with Isacc Hampton finishing in second with 64. On the female side Kayla Grant won not only her division, but also the overall female championship with 73 points.

In the high school class Brandon Cain won the championship with 71 points while Kush and Aush Patel tied for second with 60 points.

Judson West finished with 61 points in the open division to win the championship. There were no female participants in either the high school or open division.

Troy Elementary School will host the January Jam on January 28 and 29.