The Pike Patriots struggled with shooting in their 33-30 loss to Success Unlimited in the opening round of the Abbeville Christian Academy Holliday Classic on Friday afternoon.

The loss sends the Patriots into the loser’s bracket, where they will face the loser of Lakeside an Abbeville at 1 p.m. today.

“Success has a very athletic basketball team,” said Patriots head coach Allen Ponder. “Once again we just came out flat. We didn’t have a lot of energy in the first half, and we weren’t getting many shots to drop for us.”

Both teams combined to score just 24 first half points with the Mustangs leading at halftime 15-9.

“I thought we did a decent job on the defensive end,” Ponder said. “Defensively we had some areas where we broke down a little bit. For us we have to do a better job at being efficient on offense, we had way too many turnovers. They pressed us and we have to get to a point where we can handle press a little better. If we can ever get past half court and set up our offense we are pretty good.” 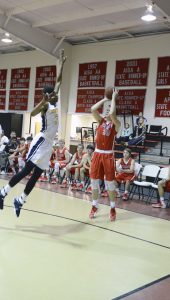 “We were awful from behind the arc today,” Ponder said. “We have to be a team that shoots the ball well from the outside. We didn’t do that today; we shot it really poorly. We just have to be efficient on offense. It wasn’t due to a lack of open looks. We just couldn’t knock them down.”

The Patriots will have a quick turnaround today.

“I like the short turnarounds,” Ponder said “I like to get back out and there and see if we can get things turned in the right direction. It will be interesting to see how our kids respond. We could come out flat again or we can get over the hump and start playing 32 minute basketball games.”

The win sets up a showdown with region foe Lakeside this afternoon.

“We shot the ball really good tonight,” said Patriots head coach Robert Hawkins. “We took care of business, and we were the better team. Everybody got to play a lot and I was happy with that.”

The Patriots jumped out to an early lead and went into halftime holding a 33-15 lead.

“Their ball handling skills weren’t very good so we decided to play the passing lanes and we got a lot of steals,” Hawkins said. “We had some easy layups, and we just shot the ball really good.”

The Patriots went into fourth quarter holding a commanding 45-22 lead. With 6:30 remaining in the ball game Hawkins elected to empty his bench and get all of his players quality playing time.

Lauren Johnson led the way with 22 points on 10 of 14 shooting. She had seven rebounds and five assists.

Mya Terry finished with 16 points on eight of 12 shooting and had three assists.

The Patriots will take on Lakeside this afternoon 5:30 p.m.

Patriots return from lengthy break with a win over Fort Dale