“It was the greatest thing ever,” Gamble said. “This is something that I have been working for since I was eight years old. To finally being able to sign and to realize that a dream is coming true is the best feeling ever.” 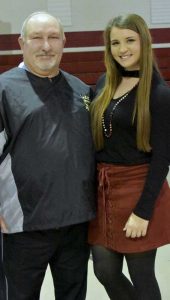 As a member of the South Alabama Lady Titans travel ball team, Gamble went to play CVCC in a pair of games. After the two games, CVCC Steve O’Steen spoke with all the seniors and Gamble was one of the players that were offered a scholarship.

“I was very shocked when he approached me about signing a scholarship,” Gamble said. “I was really nervous. I had other offers and I thought that CVCC was the place for me.”

One thing that drew Gamble to the school was coach O’Steen himself, who has been associated with the school since 1977.

“I love his coaching style,” Gamble said. “Seeing what kind of girls he has and how he reacts on the field made me want to be part of the school and the team.”

The small intimate campus in Phenix City was another plus for the senior.

“I love the campus,” Gamble said. “I like that it’s a smaller school and I think it will better for me coming right out of high school. I can get used to the college feel.”

Throughout the years, Gamble has received help from various coaches, but the one on the top of her list was her father.

“My dad has been my coach ever since I was younger,” Gamble said. “He knew what I can handle and what I can’t handle.”

Tuesday was not just an exciting day for Gamble, but for her coaches as well. Head coach of the Lady Titans Steve Boutwell has worked with Gamble for many years and he was not surprised with the news of her signing.

“I was glad to get her signed,” Boutwell said. “I can’t believe she got overlooked by some of the bigger schools. We worked really hard to get her signed. We played them in a double header and they offered her on the spot.”

Boutwell believes that the Pirates are getting an athlete that is sharp with both the bat and the glove.

“She is a player that is going to offer you speed, a good bat, and a good glove,” Boutwell said. “She has a great attitude toward the game and you can’t ask for anything better.”

Crenshaw Christian Academy head coach Mike Sims said she has all the potential to become a five-tool player at the collegiate level.

“I think that is all on her and he work ethic,” Sims said. “She doesn’t have a ceiling. She is a player that runs well and she has great strengths. She can end up being a four, five tool player in softball because she can do everything at a high level.”

Gamble enters her senior season dedicated to improving her game before heading to the college level.