Back to work: Trojans ready to begin preparations for Ohio 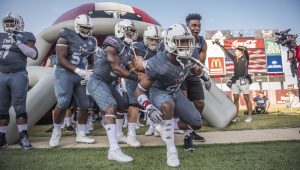 Photo/jonah enfinger
The Troy Trojans began preparations for next Friday’s bowl game with Ohio on Wednesday afternoon. The Trojans and the Bobcats will kick off the Dollar General Bowl at 7 p.m. from Ladd Peebles Stadium.

With a little more than a week until Troy’s trip to Mobile for the Dollar General Bowl, the Trojans have hit the field to begin preparations for Ohio.

After finishing the regular season 9-3 the Trojans seek their first 10 win season in the programs Division I history.

“Today (Wednesday) will be our first Ohio practice and our first day to be in bowl prep since 2010,” said head coach Neal Brown. “It is always a positive if you are practicing football in December. There are a lot of good things going on. We have the Dollar General Bowl on the 23rd and our players are fired up about that.”

The Trojans have been on the field since their season wrapped up against Georgia Southern a little over two weeks ago, they practiced for about 45 minutes over the weekend.

“Friday, Saturday and Sunday we practiced for about 45 minutes to an hour and went against each other to stay in shape and stay sharp and also just to have fun,” Brown said. “We competed a lot and had surprises that guys went after.”

On the field, the Trojans are treating the bowl season as a reward to the team and the program. The Trojans are practicing in the month of December for the first time since 2010.

“It is great. Objective number one is to win the game and get that tenth win. But this is also a reward for a team and program,” Brown said. “I think there is a fine line between preparing to win and having a good time. We are going to have shorter practices than we do during the season, and we are also going to get our young guys dome work. It is an opportunity for them to make a mark entering into spring ball.”

The Trojans hope to send their seniors out with a bowl victory next Friday night.

The Trojans have used the last couple of weeks to get healthy. Jordan Chunn, who finished the regular season with 1,232 yards, has been battling a foot injury and the time off has helped him recover.

“The casual observer can tell that Jordan was not the same after the Appalachian State game,” Brown said. “He had an injury that he fought through and he didn’t practice much for the last three weeks of the season. He has been off and he will do a little more this week, but we are going to let him rehab and get back healthy until we get down to the bowl site on Monday. I expect him to be back at full strength for this game.”

The Trojans will take on the Bobcats at 7 p.m. on Friday December 23 at Ladd Peebles Stadium in Mobile.