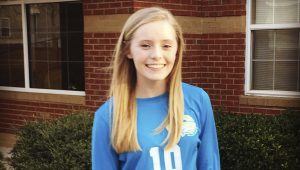 Lady Eagles sophomore volleyball player Hannah Calhoun had a season to remember in 2016, one that ended with a spot on the Dothan Eagle Super 12 volleyball team.

After getting her feet wet briefly with the varsity team a year ago, Calhoun was a mainstay for the Eagles in 2016 compiling a total of 602 digs, good enough for 13.7 per match, 61 aces and 35 kills. Earning a spot on the Super 12 team was a goal that Calhoun gave herself at the beginning of the year.

“I was really excited,” Calhoun said. “I didn’t know if I was only going to make this year or not, but it felt really good.”

The 602 digs were most in the Wiregrass area per the Dothan Eagle and even though she was happy with her season, Calhoun believes it could have been better.

“I think I had a pretty good year,” Calhoun said. “There were some rough games, where I could have been better, but I am happy with what I did.”

There is no one happier for her success this season than her head coach Amy Warrick.

“It’s great, that was one of the things that I wanted for her,” Warrick said. “Hannah is an amazing libero. She has that quickness and the drive to go after anything. She had those numbers because she covers so much ground.”

Even though she is just a sophomore, Calhoun was the only returning player in 2016 that stayed on the court throughout the match. She became one of the leaders not only her voice, but by example and helped lead the Eagles to the post season

“We really stepped up this lead,” Calhoun said. “We stepped up and we had to have new leaders. I tried to be a leader, there are people are older than, but I tried.”

Calhoun players with energy and passion because the love she shares with the game of volleyball.

“It’s so much fun,” Calhoun said. “I love playing with my friends because it’s a great atmosphere and we are always laughing and having a good time.”

Calhoun still has two more years left to dawn the purple and gold uniform and she intends to build off this achievement and continue to grow as a player.

“I am happy that I made it, but I want to do better things,” Calhoun said. “I can do better that.”

“She (Calhoun) started in junior high, but last year was her first year to ever touch a varsity court,” Warrick said. “Harris is a good example for Hannah because she started making this when she was younger and she has gotten better and better. Hannah (Calhoun) has all the potential to go somewhere and become a student of the game.”

Calhoun wasn’t the only Eagle to make it on the Super 12 team, teammate Kelsey Gibson was named as an honorable mention.