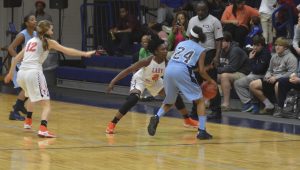 Messenger Photo/mike hensley
Niaria Jones guards her player during a game against Barbour County on Tuesday night. Jones and Trojans defeated the Jaguars 67-14.

The Charles Henderson Lady Trojans raced out to an early lead and easily defeated Barbour County 67-14 on Tuesday night.

The Trojans remained perfect on the season thanks to a strong performance on both offense and defense.

“I am very proud of them,” said Trojans head coach Dyneshia Jones. “They played great defensively and they played well on offense. We are also playing much better with our fast breaks and when we are in transition.”

“No matter who we play we want to play hard,” Jones, said. “All of that will pay off in the long run so that’s what we work hard on.”

Charles Henderson carried a 37-8 lead into the half.

The Trojans had seven different players get on the scoreboard in the opening half and were led by Tatyana Siler who had nine.

“That’s great,” Jones said. “Other teams don’t know who to guard right now. We don’t just have one good player on the team we have nine. All of them are a threat.”

The Lady Trojans kept building the lead as the second half rolled along. They took a 52-8 lead into the fourth quarter and led by as many as 53 points as they cruised to an easy victory.

Niaria Jones led the Trojans with 19 points while Siler finished with 14. Sophomore Maori Davenport also finished in double figures with 12.

The boys closed out the evening with a 50-48 win over the Dolphins. DQ  Toney and Josh Roberts led the way with 12 points. Roberts also had 13 rebounds on the night.

The Trojans will back in action when they play in the Northview Christmas Tournament this evening.