Goshen gets home win over Ariton 66-53 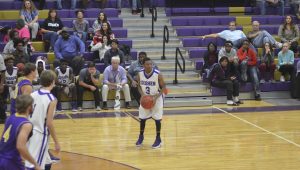 The Goshen Eagles continued their winning ways on Monday evening with a 66-53 win over the Ariton Purple Cats.

After struggling to put together four good quarters of basketball this season, the Goshen Eagles played one of their more complete games until the games final moments.

The Eagles put together a 34-point half, and although they got production out of their top scorers, junior Eric Williams stole the show in the second quarter by scoring 13 points, helping the Eagles carry a 34-24 lead into halftime.

“I saw a lot of confidence and it finally turned on for him,” Carroll said. “We have been working with him in practice. He played for the B team last year so this is really the first time he has been able to put on his big boy pants and we threw him into the fire and got his feet wet.”

On the defensive side of the ball the Eagles deployed man coverage and forced the Purple Cats to turn over the basketball.

“We like to mix things up a little bit determining who we are playing,” Carroll said. “We still don’t know our identity yet. As a coaching staff, we are still figuring out what we need to do to get our kids in the right position to play. We felt like that was our best matchup. We wanted to get the kids on the bench some playing time and some of those kids offer us good hustle on defense and that creates points.”

Michael Hollis led the team with 18 points, while Williams finished with 13 and Zack Alford had 12.

The Eagles will be back in action this evening when they host Pike County in a rematch of last week’s one point loss to the Bulldogs.

“I think our kids are hungry and up for the challenge,” Carroll said. “We need to take care of what we do and play our game. Everything else will fall into place.”