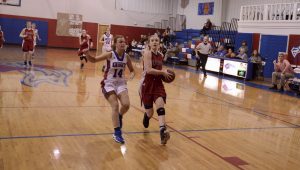 Photo/debi green
Mya Terry races down the floor against Macon East on Friday night. Terry and the Patriots defeated Macon East 44-32 in the opening round of the Macon East Tournament and will play Edgewood in round two this evening.

The Pike Liberal Arts Patriots defeated Macon East 44-32 in round one of the Macon East basketball tournament on Friday evening.

With the win the Patriots improve their record to 5-2. They will advance to round two where they will take on Edgewood.

“We looked a lot better,” said Patriots head coach Robert Hawkins. “We still turned the ball over a lot. I think if we hadn’t turn the ball over we would have beaten them by more than we did.”

The Patriots led throughout much of the game and Hawkins was pleased with the flow of the game.

“We led and had a comfortable lead,” Hawkins said. “I felt comfortable the entire game. It was a game that we felt like we controlled the entire time. The way our defense was playing they weren’t able to put up the points needed to win a game.”

Hawkins was impressed with how the defense controlled the game while playing man to man.

“We finally started recognizing what the ball carrier was doing,” Hawkins said. “We were able to do what you need to do in man to be able to stop them. We got in the passing lanes and stayed out of foul trouble. I was happy.”

The win sets up a second round showdown with Edgewood.

“I think its really important,” Hawkins said. “We played in a physical tournament before and should have won. I think Edgewood has a very good team from what I hear, but I think it would be important for these girls to go out there and win one of these tournaments.

Tip off between the Patriots and Edgewood is scheduled for 5 p.m.

The Patriot boys basketball teams struggled with Macon East on Friday falling 75-28. The Patriots only scored five points in the first quarter and 19 in the half and entered halftime trailing 60-19.

Reese Burbage led the Patriots in scoring with seven points, while Ethan Green finished with six.

With the loss the Patriots will enter the losers bracket and take on the loser of Edgewood and Evangel today at 3:30 p.m.