Narrow win: Patriots and Generals go down to the wire 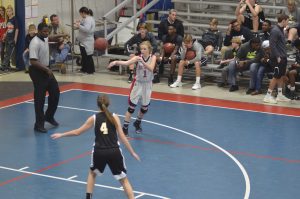 Photo/mike hensley
Mya Terry passes the ball to a team mate during the Patriots game against Autauga on Thursday night. Terry and the Patriots pulled off a one point win over the Generals

The Pike Liberal Lady Patriots picked up their second win in as many days when they defeated Autauga 39-38 on Thursday.

The Patriots improve to 4-2 on the season

“I thought we would have made some strides overnight and play better basketball, but we took a step back tonight,” said Patriots head coach Robert Hawkins. “We won the game; that is about all I can say.”

The Patriots and the Generals were locked in a low scoring battle in the first half. After jumping out to a 2-0 lead the Generals raced out to an 8-2 lead in the middle of the opening quarter. The Patriots went on a 7-0 run to even the score at before heading into the second quarter. Senior Lauren Johnson scored six of nine points in the first quarter and went on to score 14 in the half.

“We turned the ball over,” Hawkins said. “It was turnover after turnover and we were missing easy shots.”

The Patriots took their first lead of the game at 13-11 early in the second quarter and never relinquished it, taking a four-point lead into the half.

The Lady Patriots went on an 8-2 run to begin the second half and led by as many as 10 points at 28-18. After applying a full court press late in the third quarter the Generals clawed back in the game and trailed by two points at 28-26 heading into the fourth quarter.

“We started to move the ball a little better,” Hawkins said. “At the beginning we were tight and right now we just don’t have anybody that can step up and take care of the ball.

The Patriots stretched their lead back to 38-29 after Johnson converted scored six points in the first four minutes of the quarter.

The fourth quarter was a test of nerves for the Patriots faithful. Although they led throughout, the Generals took things to the final seconds before Pike officially closed out the game.

Johnson led the Patriots with 27 points on the night. Mya Terry and Susie Stell both finished with five points.

The Patriots will be back in action on today when they take part in the Macon East Tournament in Cecil.