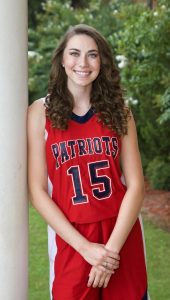 Pike senior basketball player Lauren Johnson put an exclamation point on a great career when she scored her 1,000th point early this season.

Johnson has been playing basketball for as long as she could remember, and ever since eighth grade she has called Pike Liberal Arts home.  After playing both varsity and junior varsity in eighth and ninth grade, Johnson joined the varsity ranks full-time as a sophomore.

In a game against Autauga on November 29, Johnson achieved her long-awaited goal of reaching 1,000 points.

“It was really exciting,” Johnson said. “I am glad that I was able to do that, not just for me, but to show the other girls that they can reach that goal.”

Johnson came into the season knowing that the milestone was in reach, and knew that it would happen soon.

“My dad has been keeping count of how many points I have scored and that has been one of my goals for a long time,” Johnson said. “I was so excited that I got it. There was a lot of excitement and satisfaction.”

Lauren’s father got her and her sisters in the game when she was a young child and it has been a passion for her ever since.

“He taught me a lot and he got my sisters and me really excited and interested in it,” Johnson said. “Ever since I was little and playing around, I just had a lot of fun and fell in love with the game. It’s a fast game and I love playing with my team.”

Johnson has been a true team member while she has been a Patriot. She is looked at as one of the key scorers on the team. She is also seen as a leader, which is not something that always comes naturally.

“It’s not an easy thing to do and it has taken me a while to actually take the role,” Johnson said. “Last year, I didn’t think I was quite there; this year I feel more confident and encouraging. It’s something that I have to work on.”

Anybody you talk to at Pike would call Johnson a competitor; the best thing about the game of basketball according to Johnson is the opportunity to compete.

“I like to compete and I like to win,” Johnson said. “The best part of the game is when it clicks for your team and you are in a groove. Everything flows and you just play the game.”

Johnson has high aspirations to take her came to the next level and play collegiately.  To do that she acknowledges that she will have to work on a key area of her game

“I really want to improve at shooting three-pointers,” Johnson said. “I don’t take them that much and I want to be able to do that.”

Johnson welcomes practice because it’s an opportunity to work on her craft and build her relationship with her teammates.

“It doesn’t come easy, but its fun and I enjoy practice,” Johnson said. “It’s not only where you get better, but you also get to work with your teammates and I think its fun.”

Johnson has a special relationship with her teammates. Fellow Patriots such as Mya Terry, Susie Stell and Danielle Brown have had a special impact in Johnson’s playing career.

“They have helped me so much,” Johnson said. “After several games, especially last year when I was having a hard time they are always there to lift others and me up.”