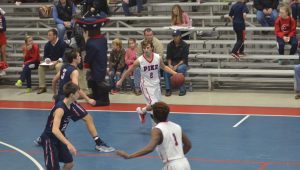 “I thought we played well defensively,” said Lady Patriots head coach Robert Hawkins. “I thought we were doing good until the wore us out. We just never got into any rhythm on offense.”

The Lady Patriots struggled to take care of the basketball offensively against a pressing Warrior defense.

“We haven’t played against a press all year,” Hawkins said. “We knew going in that the full court man was going to be our Achilles heel.”

In later action, the boys battled with the Warriors from the opening tip and came up one possession short.

“I am extremely proud of my kids,” said Patriot head coach Allen Ponder. “We have come a long way. I thought we competed tonight with incredible effort and I couldn’t ask for more.”

In the first half the Patriots knocked down five three-pointers, three of which came from senior Hunter Jones.

The Patriots took a 21-17 lead into halftime and led throughout much of the third quarter until the Warriors evened the score at 29. With the Warriors holding a 37-32 lead heading into the fifth the Patriots spent the quarter trying to retake the lead. They got to as close as one point in the final minute, but costly gave the Warriors the win.

“From game one we stressed competing and I think we are moving towards that,” Ponder said. “I thought we did a much better job of that tonight. The scoreboard told the tale: if we give effort we are going to have a chance to win basketball games.

Reece Burbage led the Patriots in scoring with 14 points. Both Reed Jinright and Hunter Jones contributed with 12 points, while Random Rigby had eight.

The Patriots will be back in action this evening when they host Abbeville Christian.