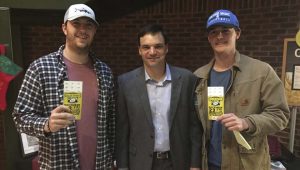 Photo/troy athletics
Troy University students Nick Golden and Clayton Willis pose with Troy head football coach Neal Brown. Golden and Willis were the first students to claim their free Dollar General Bowl tickets when they got in line at 6:40 a.m.

Hundreds of Troy University Students lined up on Monday afternoon to get free tickets to the 2016 Dollar General Bowl courtesy of head coach Neal Brown.

After finishing the regular season 9-3, The Troy Trojans will participate in their first bowl game since 2010 when they head down south to Mobile to take on the Ohio Bobcats.

After racking up nine wins, tied for the most in their FBS history, the Trojans waited with anticipation for the bowl game announcement.

“This is a big day for our program and our athletic department,” said Troy Athletic Director Jeremy McClain. “We are obviously excited about getting back to where we want to be and feel we belong as a program, and that is consistently playing in a bowl game. This is a great opportunity for us, and kudos to Coach Brown and his staff.”

This year’s bowl matchup with the Bobcats will be a rematch of the 2010 New Orleans Bowl when the Trojans defeated the Bobcats 48-21.

The Bobcats finished the 2016 regular season with an 8-5 record.

The Trojans will be making a trip to Mobile’s Ladd Peebles Stadium for the second time this season. They defeated South Alabama early in the season 28-21.

The Trojans also played in Mobile in the GMAC Bowl following the 2009 season when they took on Central Michigan.

“It is a huge accomplishment. Mobile is one of my favorite cities,” said head coach Neal Brown. “It is a great destination for our fans, alumni, our students and our players. We look forward to going down to Mobile and celebrating what has been a great turnaround season. Playing in it in January in 2010, it is a first class event. The people in Mobile and the people that are associated with this bowl will do a tremendous job.”

The Dollar General Bowl has had their sights set on Troy Since the early portion of the season, and a successful year helped to make that a reality. A successful trip to Mobile earlier this season, in which the university loaded up 16 fan buses, also helped make the bowl pick possible.

“The Mobile folks and Dollar General Bowl have really been interested in us all year,” McClain said. “They have been to several of our games and have really been plugged into us since the very beginning. I think our trip down to South Alabama where our fans really went above and beyond and showed out and really supported our team didn’t hurt.”

The Trojans will have just under three weeks to prepare for the Bobcats.

“The first piece of business for our student-athletes is finals,” Brown said. “Dead day is Wednesday and then they will have finals Thursday and Friday and then Monday and Tuesday of the following week. This is going to be a reward for our players.

“We will get some extra practice time which will be good for our younger guys. This will be a reward and we are going to treat it as that. We are going to do everything we can within the rules to reward our student-athletes for helping us turn this program around.”

Troy will be one of six Sun Belt Conference teams going bowling. They are joined by Arkansas State, South Alabama, Appalachian State, Idaho and Lafayette.