Game day: Trojans close out regular season against the Eagles with championship on the line 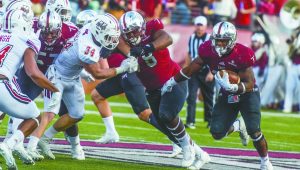 Photo/jonah enfinger
The Trojans have their eyes set on a share of the Sun Belt Conference title. To accomplish that they will have to defeat the Georgia Southern Eagles in Statesboro.

The Troy Trojans travel to take on the Georgia Southern Eagles today with a share of the Sun Belt Conference crown and double-digit wins on the line.

The Trojans (9-2) are in search of their first 10-win season in their Division-I history.

“That would be awesome,” said Troy quarterback Brandon Silvers. “First time in Division 1 history. There is a lot to play for. It’s on ESPN2, another televised game.”

Heading into year two under head coach Neal Brown, the Trojans had an eye on improving last year’s 4-8 record.

“Ten wins honestly wasn’t a goal for us,” Silvers said. “Our goal was to be most improved and Sun Belt champions. It’s going to be big for us to get 10 wins. We’ve have had a lot of great teams here, and we haven’t done it yet in Division 1.”

After their loss to Arkansas State on Nov. 17, the chances looked bleak for the Trojans to win their first conference championship since 2010. Two weeks later the Trojans have a chance to claim a share of the title after Louisiana-Lafayette upset Arkansas State.

The Eagles have defeated Troy by a combined score of 80-27 during the past two years’ matchups.

The Trojans have won 10 of the 15 meetings against Georgia Southern and are 6-2 in Statesboro. This year, the Eagles are in the middle of the pack in the conference standings with a 3-4 record and an overall record of 4-7.

Typically a triple-option offense, the Eagles have mixed in a few passes in 2016. They are averaging 378 yards of offense per game, with 153 coming through the air.

“Georgia Southern has one of the best rushing offenses in the country,” Brown said. “They are more multiple this year as far as throwing the ball. I think the offense runs through Favian Upshaw and Kevin Ellison, the two quarterbacks they play.”

The Eagles rushed for 325 yards on the Trojans last year, and with the threat of the pass mixed in the Trojans are expecting a challenge.

“It’s different,” said Jamal Stadom. “The option is always going to be different. It’s just discipline week – you got to do your job, everybody is going to have specific assignments – so hopefully everybody is just locked into that and do their job. Hopefully we’ll get it done.”

After struggling with Arkansas State, the Trojans allowed 256 yards of offense by Texas State a week ago and feel like they got their defense turned around.