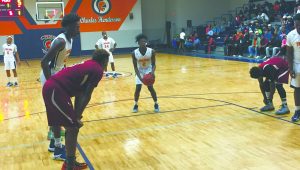 Messenger Photo/mike hensley
The Charles Henderson Trojans improved to 2-0 on the season by defeating New Brockton 59-43 on Friday night.

The Lady Trojans began the night with a 61-8 runaway win, and the boys closed by defeating New Brockton 59-43. Both wins improve the Trojans to 2-0 on the season.

“They are playing with a lot of heart, but they are not playing very smart right now,” said head coach Shelby Tuck said. “We came out sluggish and we were lackadaisical at the beginning, but they got some good things going.”

The Trojans found themselves in a 7-2 hole early before battling back and taking their first lead of the half at 13-12 with 1:24 remaining in the first quarter. After the first quarter concluded with the Gamecocks holding an 18-15 lead, the Trojans regained the lead and led by as many as seven before heading into the locker room at halftime leading 33-26.

The highlight of the opening half occurred when Josh Roberts laid down a thundering dunk early in the second quarter sending the fans into frenzy.

The dunk paved the way for a successful second half for the Trojans according to their head coach.

“I always tell our energy players if you can make a play diving on the floor, getting a loose ball or getting a big rebound, all that brings a lot of excitement,” Tuck said. “The guys really feed off energy and that is what we work on at practice.”

The Trojans came out in the second half and led by as many as 18 points and carried a 48-33 lead into the fourth quarter. The Gamecocks were able to dwindle their deficit down to as little as 10 points after they were able to knock down two consecutive three-pointers.

The Trojans were led in scoring by both Jalen Tuck and DQ Toney who finished with 13 points on the night.

The Lady Trojans preceded the boys and walked away with an easy 53-point victory over the Lady Gamecocks.

“We have a bunch of hard-working young ladies,” said Trojans head coach Dyneshia Jones. “I want to commend New Brockton for having class. They are a young team and they played hard.”

The Trojan defense held the Gamecocks to just two points in the opening half and New Brockton didn’t get on the board until the 4:52 mark of the second half. The Trojans put up 34 first half points and headed into the locker room at halftime holding a commanding 40-2 lead.

“We moved our feet and communicated,” Jones said. “That is something that I always tell them to do.”

The Gamecocks came out and scored six points in the second half and the Trojans steam rolled to an easy win.

Maori Davenport led the Trojans in scoring with 14 points while Tatyana Siler finished with 10 points.

Both the boys and the girls will be back in action when they return home to take on Dothan on December 6.