Came up short: Trojans fall to Bulls after lackluster start 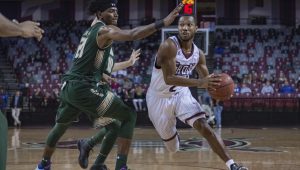 Photo/troy athletics
The Trojans found themselves down by as many as 21 points on Thursday night against the South Florida Bulls. A strong second half comeback came up just short and the Trojans fell to the Bulls 80-74.

Despite a valiant comeback effort, the Troy Trojans fell to the South Florida Bulls 80-74.

“We didn’t come out ready to play,” said Troy head coach Phil Cuningham. “We were flat, and we had no energy. They beat us inside, and they made some threes that we weren’t expecting.”

The Trojans shot just 29 percent in the opening half compared to 60 percent by the Bulls.

“The strength of their defense is inside,” Cuningham said. “We are a team that likes to go inside, and we have been effective inside. The first two to three possessions we got the ball inside, and they blocked the shots and just like that we’re 1-10.”

The Bulls shot a blistering 45 percent from behind the arc and outscored the Trojans in the paint 22-4 in the opening half.

The Trojans converted on one of their first 10 shots and fell behind early. After coming to within one point at 9-8, the Bulls went on a 15-3 run to pull ahead 24-11.

The 43 first half points were the most the Trojans have allowed in a half all season.

“We came out sluggish and slow from the jump,” said Trojan Wesley Person. “Give credit to them they came out and made shots early. They built that lead and it was hard to come back.”

With 6:00 remaining in the second half the Trojans got back-to-back three-pointers from Jordon Varnado and Wesley Person to cut the Bulls lead to just nine.

With the Trojans down by six points the Bulls converted on a three-point attempt to push their lead back out to nine points with just under 4:00 remaining.

The Trojans got back to within five points, but with 1:18 remaining in the game, Geno Thorpe connected on an old fashioned three-point play to push the lead back out to 8.

“I thought the turning point started with 4:00 remaining in the first half,” said DeVon Walker. “We came into halftime and we knew where we messed up. We came out in the second half and carried over the momentum.”

“We had great effort to get back in the game,” Cuningham said. “We cut the lead to five and then had a turnover on a drive that would have cut it to three. The game was decided in the first 15 to 16 minutes of the game.”

The Trojans had five players finish in double-figures led by Jeremy Hollimon who finished with 15 points. Wesley Person finished with 14 while Walker had 12.  Varnado and Person had 11 points, while Juan Davis finished with 10.

The Trojans will return to Trojan arena on Sunday to take on in-state opponent Alabama State at 5:15.