Redemption: Trojans look to close out regular season with a win over Georgia Southern on Saturday 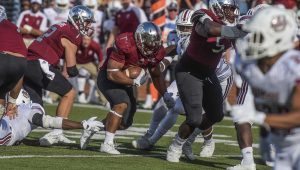 Photo/jonah enfinger
The Troy Trojans will ride into Statesboro this weekend with an eye on claiming a share of the 2016 Sun Belt Conference Championship. Last season the Trojans fell to Georgia Southern 45-10.

The Troy Trojans look to close out their 2016 “Redemption Tour” undefeated on Saturday with a win over Georgia Southern.

The Troy Trojans have already defeated four teams this season that defeated them a year ago in Idaho, Georgia State, South Alabama and Appalachian State. The fifth stop on the tour has a lot more riding on it.

A win for the Trojans would give them a share of the Sun Belt Conference championship.

The Trojans entered the season with an eye on improving and contending. To do that they knew they had to focus on redemption.

“It’s a big focus. We’re undefeated in a redemption role, and this is the most important one,” said Troy cornerback Jalen Roundtree. “This determines whether we share the championship and if we get the first 10-win season in Troy (Division I-A) history. There’s a lot on the line for this game right here.”

The Eagles have gotten the best of the Trojans in the past two years, beating them by a combined score of 87-20 including a 45-10 win a season ago.

“I think it’s Redemption Road round 5,” said Troy defensive lineman Jamal Stadom. “They held the ball for like 14 minutes (on one possession) last year. They whooped us the last two years. This is big redemption, so hopefully we can go out here and play to our best ability and get the W.”

For many players, last years loss in which the Eagles scored 45 unanswered points still sticks in their mind.

“They whooped us two straight years,” quarterback Brandon Silvers said. “That was terrible last year, that was like Arkansas State. The first drive we went down there and drove all the way down the field and got a field goal. We had a fumble recovery for a touchdown and started the game off 10-0. We just beat Monroe the week before and we were feeling good. It went downhill from there; it was bad.”

The Trojans will have the opportunity to claim a share of the championship in their third nationally televised game of the season. They could also get to ten wins for the first time in Troy’s division one history

“We are excited to play on national TV,” Brown said. “Last time we were on an ESPN channel it did not go so well. We did not represent our program in the right way, so we are looking forward to the opportunity to follow up with that.”

The Trojans and the Eagles will kick things off at 11 a.m. from Paulson Stadium in Statesboro and can be seen on ESPN2.

Trojans back in title race with win over Bobcats