A dream come true: Stell signs on with Faulkner University 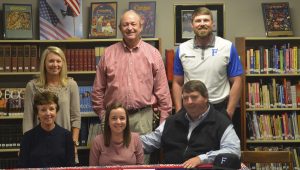 Pike Liberal Arts golfer Susie Stell signed a scholarship on Tuesday morning to play golf at Faulkner University in Montgomery. She was joined in the library by friends, coaches and fellow students.

Stell has accomplished a lot while playing golf for the Patriots. She is the three-time defending state champion, but that pales in comparison to the excitement she felt on Tuesday.

“I am very excited,” Stell said. “It’s great to have so many people here that support me: all my classmates, coaches and the golf team.”

Stell has been a student of the game of golf since she was a child and it’s a sport she loves. From the time she was in eighth grade, head coach Gene Allen has been side by side with Stell giving her guidance and support.

“I love coach Allen. He has been here since the eighth grade,” Stell said. “He is a great coach and I love him.”

“Nobody works harder that Susie,” Allen said. “She has been working and playing golf forever. She wants to get better and has great parental support. She is a phenomenal kid and a pleasure to be around.”

There aren’t many golfers in the state like Stell according to coach Allen. Her goal is to be the best golfer in the state regardless of male or female, and with her determination, coach Allen believes she has come close to accomplishing that goal.

“There aren’t a lot of girl golfers in AISA,” Allen said. “We talk all the time, we try to get her to beat the guys. She is getting better and better every year and she is getting closer to the top. There are some phenomenal golfers in AISA. She has had a really good career and I expect it to be good this year.” 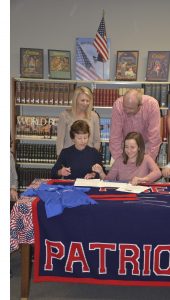 Even with this accomplishment, Stell knows that she still has plenty to work on if she wants to compete at the collegiate level.

“I am excited to take it the next level and get better,” Stell said. “I want to work on my short game a lot, that is where you score. I want to keep working and I hope to get better.”

Stell will be attending a campus close to home in Montgomery. The small and quiet atmosphere was what drew Susie to Faulkner.

“I really like the size of it,” Stell said. “It’s not too big and it really reminds me of Pike. It won’t be overwhelming when I get there.”

She will be playing for head coach Travis Lauterbach who is in his fifth year with the Eagles.

“I have met a couple of the girls and they really love him,” Stell said. “I am excited to be able to get to play for him.”

Stell wasn’t the only one excited for the opportunity on Tuesday. Lauterbach was more than a little excited to know that Stell had chosen the Eagles.

“It was a big signing for us,” Lauterbach said. “We knew there were a quite a few schools looking at her. To finally get the call when she said she was going to come to Faulkner was a big time relief. Very thrilled, not just me, but the girls on the team as well.”

Other than her superior play, one of the things that attracted coach Lauterbach to Stell was her determination and work ethic.

“As far as the team goes, it’s always nice when you can get a few girls that you can create a community out of,” Lauterbach said. “Susie will add to the culture that we are trying to have at Faulkner.”