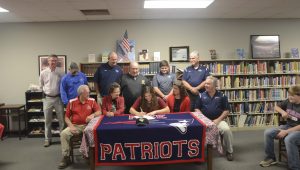 After committing to Chattahoochee Valley Community College back in August, Pike Lib first baseman Danielle Brown put pen to paper and made it official on Monday afternoon.

After committing in August, Brown had to wait three months to make a dream-come-true official in front of family and friends.

“This is a great feeling,” Brown said. “It’s a relief really. I was getting anxious. I was so ready and prepared.”

“It was an amazing feeling,” Brown said. “I am extremely blessed.”

Among the spectators were current and former head coaches and people that meant so much in Brown’s life such as Troy parks and Recreation Director Dan Smith and Assistant Director David Dickey.

“I have been very blessed throughout the years,” Brown said. “A lot of people have helped me and it has been amazing.”

Monday’s signing was not only a celebration for Brown, but for her coach Robert Rollan as well.

“It’s always good seeing one of your girls sign,” Rollan said. “It’s good for your program and for the Pike Liberal Arts community. It just means your program is heading in the right direction.”

The accomplishment for Brown is well deserved according to coach Rollan.

“She is a hard-working girl that does things right everyday,” Rollan said. “She works extremely hard and she takes care of the little things. I think that is what coach (Steve) O’Steen saw in her.”

CVCC will provide an intimate setting for Brown; it’s a campus that reminds her of home.

With her senior season still ahead of her, Brown still wants to get stronger and improve her game.

“I want to get into the weight room and get stronger,” Brown said. “I want to improve my bat and my arm strength.”

Brown will be under the tutelage of head coach Steve O’Steen who is entering his 17th season as head coach of the Pirates. O’Steen believes with a little work Brown should be competing for a starting role at first base.

“She will do great with us,” O’Steen said. “I have seen her hit, she has a lot of power and she’ll fit into our program. I expect Danielle to come right in and have a good shot at taking first base.”