Turning the page: Trojans get back to work against Arkansas State 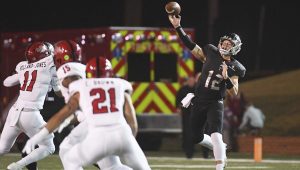 Photo/Thomas graning
Following last week’s loss to Arkansas State in front of a national audience, The Troy Trojans look forward to returning to the field on Saturday afternoon when they travel San Marcos to take on Texas State

The Troy Trojans hope bounce back with a win this Saturday when they travel to San Marcos to take on Texas State.

“It is a great time of the year and we are grateful for a lot of things, probably none more so than the opportunity to go out and redeem ourselves from Thursday night,” said head coach Neal Brown.

The Trojans spent the majority of the week on a predominantly empty campus and they focused on getting back to work and focused on this week’s opponent.

“I thought the coaches and players did a good job taking ownership of what went wrong and were accountable,” Brown said. “I am proud of this team’s accomplishments and I know without a shadow of a doubt that we are going to bounce back.”

The Trojans will be going up against a Bobcat team in search of their first conference win this year.

They are lead by head coach Everett Withers who is in his fourth season at the helm in San Marcos.

“I think Everett Withers is one of the top defensive minds in the country,” Brown said. “He goes back a long way and I have a lot of respect for him as a man and as a coach. He and his staff did a great job at James Madison. They had one of the most explosive offensives over the two years he was the head coach there.”

The defense for the Bobcats enters the game allowing 41 points per game on 490 yards. The Trojans hope to get their offense back on track after putting up just 262 yards and turning the ball over 5 times last week.

“They give you a lot of different looks with their front and linebackers,” said Troy offensive coordinator Kenny Edenfield. “At the end of the day it gets back to the same thing. We have to make sure we take care of our business.”

The Trojan defense hopes to get right this week as well, going up against a Bobcat offense averaging 20 points per game 313 yards.

“On offense it starts with Tyler Jones, the quarterback. He’s gritty,” Brown said. “He is a hard-nosed guy and the leader of the offense. They do a good job of getting the running back the ball in a lot of different ways.”

Jones has thrown for 11 touchdowns and thirteen so far this season.

Troy punter Ryan Kay will have to pay extra attention to his punts on Saturday when the Trojans go up against one of the top punt returning teams in the nation.

“The special teams is where they have the ability to make a difference,” Brown said. “They have the best punt return team that we have faced all year. That is going to be a tremendous challenge for us. We are looking forward to it.”

The message to the Trojan players was to move on following their loss last Thursday. With two games remaining in the regular season, the Trojans believe there is still plenty to play for.

Kickoff between the Trojans is scheduled for 3 p.m. and can be seen on ESPN3.