A dream came true for former Pike County head football coach Wayne Grant when he was tapped for induction into the Alabama High School Sports Hall of Fame.

Grant will be the seventh coach from the state of Alabama to be inducted during a ceremony at the Renaissance Montgomery Hotel and Spa in March. 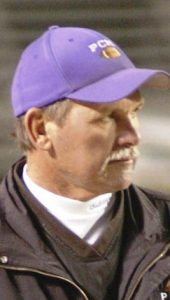 submitted Photo
Former Pike County head football coach Wayne Grant will be the seventh coach to be inducted in the Alabama High School Sports Hall of Fame in March.

“It’s a big honor to me personally to receive this from the Alabama High School Athletic Association,” Grant said. “There a lot of deserving people out there and a lot of people that have worked hard. I am personally proud of it and proud of my peers and the people that nominated for me.”

A trip to the AHSAA office sparked the dream for Grant.

“When I was younger I didn’t think about the hall of fame,” Grant said. “As the years went by I had some success and got older. I went up to the AHSAA for a Saturday meeting, and I read some of the plaques in the hall of fame. I thought to myself one day I might achieve enough to be inducted.”

Football has been Grant’s passion since childhood.

“It’s all I did from the time I was 20 years old until I was 57 years old,” Grant said. “I loved the game on Friday nights. It was exciting for me to try to out think and maneuver the coach on the other side. It was seven days a week for me and all the players and teams that I coached were my family. I spent more time with them then I did my own family.”

Grant coached the Bulldogs from 1980-1991, compiling a 97-33 record and leading the Bulldogs to their first two state titles in 1988 and 1989. Following the 1991 season Grant left Pike County to coach at Talladega High School.

“Leaving was hard to do because I had such great people to work with at Pike County High School,” Grant said. “The coaches, administrators, teachers and players were all really supportive. Deep down I really didn’t want to go, but it was a step up to 6A ball. I thought I could turn a program around.”

In his first four seasons, he led Talladega to their first four-playoff appearances.

“I started to rebuild a program that pretty much reached the bottom,” Grant said. “It took five years to get them back at the top. The guys that won the championship in 1988 and 1989, I had several sons of theirs in 2005 and 2006. It was like coaching two generations.”

Both times Grant began coaching at Pike County he was tasked with starting from the bottom up. In both tenure’s Grant took over a losing team and in both tenures it took five years to rebuild the program. It’s because of those similarities that Grant struggles in picking which tenure he liked the most.

“Both times I had to build from the bottom up,” Grant said. “I am equally proud of both. I was able to coach two generations of players, fathers and their sons.”

During his tenure with the Bulldogs, Grant coached two Mr. Football winners in Chris Nickson and Steve Coleman and two players that went to play in the NFL in Fred Baxter and Cornelius Griffin.

“The coach is only as good as the players that he has and I had some really good players,” Grant said. “It’s easy to coach players like that. They wanted to be there. Fred Baxter never missed a practice and he never missed the game. He was the first on the practice field and the last on the practice field. When you have players like that it’s easy to be a coach.”

Even though he is now out of the game as a coach, Grant still has a passion for the game of football.

“I still follow the game a lot,” Grant said. “I still go to games on Friday. I like to pick and choose what games to go to. If I’m not able to go to a game, I listen to some one every Friday night on the radio. Depends on what game I can pick up.”