Both the Pike Patriot boys and girls basketball teams got their seasons started on Monday on day one of the Lee-Scott Classic.

The Lady Patriots began the night with a thrilling 49-43 win over the Generals in over time.

“It was a struggle,” said Patriots head coach Robert Hawkins. “We haven’t had any offseason work. It was a struggle to get back in the grind of the game. I am hoping we are starting to catch on. There are spots we still need to work, but I think a lot of it was repetition and getting used to playing.” 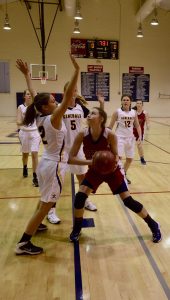 The Patriots struggled in the first half and went into halftime trailing 17-9 before being able to rally for the win. In the second half, the Patriots got into a rhythm.

“I think it was a little of me understanding what they were doing and a little bit of the girls playing basketball,” Hawkins said. “I think they were really nervous at the beginning of the game. I was proud of them. I thought they came back and started playing defense.”

With the game deadlocked at 37 at the end of regulation, the Patriots outscored the Generals 12-6 in the extra session and held on to win the season opener.

Lauren Johnson led the Patriots in scoring with 30 points.

“Without those 30 points we would have been in trouble,” Hawkins said. “She played good in the second half. I think they all played good.”

Danielle Brown finished with nine, Suzie Stell and Mya Terry each had four and Hollis Floyd had two.

The Patriot boys closed out the night for Pike with a 68-38 loss to the Generals.

“We had a lot of question marks going into tonight and I think those questions got answered,” said head coach Allen Ponder. “We got our butts kicked tonight plain and simple. At the same time it showed us the areas where we really need to get better.”

The Patriots struggled in the first half and went into the locker room trailing 37-14 at halftime. Pike tried to rally in the second half, but their deficit was too large to overcome.

Hunter Jones finished with a team-high six point while Reed Jinright had five.

Both teams will be in action on Tuesday morning when they take on Macon-East beginning with the girls at 9 a.m.

“I think the girls needed to get that first game in their system,” Hawkins said. “Now they can turn around. Although it’s a quick turnaround, they are ready to play again. I think they are eager to play again to show that they can play better.”

“We have a game tomorrow (this morning) and we hope to have a better showing,” Ponder said. “We hope to compete a little harder than we competed tonight. It will give us a chance to get to get back to work and get better.”