Lady Trojans look to take next step in 2016 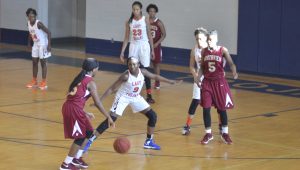 Messenger Photo/mike hensley
The Charles Henderson Lady Trojans knocked on the door of a state championship last season. This season the Trojans look to finish the job.

The Charles Henderson Lady Trojans made it to the doorstep of a state championship appearance last year. This season, nothing short of a championship is on the mind of the Trojans.

The Trojans have hit the floor hard for practice in advance of their season opener on November 28. Charles Henderson is starting later than most this season and the players are ready to get going.

The Trojans have been through the excitement of a deep playoff run, having made it to the final four a season ago. The Trojans know what is at stake this season.

“There is no surprises anymore,” said Trojans head coach Dyneshia Jones. “We have to focus one game at time, area play and the area tournament. We have experienced all of that. The goal is now to make it and win it.”

Even though the Trojans are expected to make another deep playoff run this season, Charles Henderson knows staying hungry for a win could be the difference of another long season or one that ends too short.

“You have to stay hungry,” Jones said. “Never let up and don’t worry about what the paper says and things like that. Be ready to play.”

The Trojans lost just one senior from last year’s team, but it was a big one. India Blakely is now playing at Mercer and the Trojans are looking for the other guards to step up.

Even though they are young, the Trojans feature a team that is full of talent and experience led by sophomores Maori Davenport and Tatyana Siler and freshman Niaira Jones.

“They are very experienced,” Jones said. “They are used to it. Some of them have been playing since the seventh grade. It seems like some of them are juniors and seniors now.”

With Blakely now gone, the Trojans will put more of an emphasis on getting the ball inside to their two big players.

“Of course we are going to get the ball inside,” Jones said. “We have two great post players. That is the goal. We want to get it to them first.”

By the time the Trojans hit the court on November 29, they will be going up against teams that would already have five or six games under their belt.

“We are eager to get going,” Jones said. “They are ready. We can always practice and prepare, but there is nothing like playing in a game.”

The Trojans will open their season when they host Bullock County on November 29 following the conclusion of the junior varsity game at 4:30 p.m.