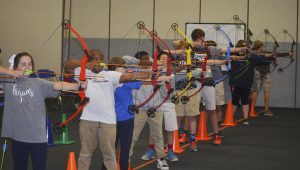 Will Templin of Troy Elementary School score 86 of 108 possible points to win the overall Trojan 3-D Archery Tournament that was held at TES on Monday. Abbie Barron of Charles Henderson High School took overall female honors with a score of 77.

“We would like to give a special thanks to the Troy Education Foundation for the grant they awarded TES to purchase these targets,” said Forrest Lee, teacher and Archery Coach for Troy City Schools. “We use them in our physical education archery, our Hunter Safety classes and during our archery season. Our program is enhanced because of this.”

Six different divisions were represented on Monday evening. There were divisions for fourth and fifth graders, sixth through eighth graders, ninth through twelfth graders and an open division. Each division was separated into boys and girls divisions.

In the sixth, seventh and eighth grade girls division, Kayla Grant took home first place with 58 points with Keisha Patel and Tatum Brook rounding out the top three. In the boys division overall boys champion Will Templin won with a score of 86 while Luke Bunn and Caleb Watkins finished in second and third.

Overall girls champion Abbie Barron finished with 77 out of the 108 points to take home first place in the ninth through twelfth grade division, while Malory Magrath came in second with 57. In the boys division, Brandon Cain won with 77 points, while James Allen and Zac Clark finished in second and third.

In the Open division, Sherri Grable and Max kersey came in first place with scores of 34 and 56, with Bill Reaves coming in second in the boys division with a score of 46.

Troy will be the site of the regional tournament in February.