Special connection: Cope hopes to mold team into a winner

New Charles Henderson boys basketball coach Justin Cope shares a special connection to his players through the game of basketball.

Since 2011 Cope has been involved with the students as head basketball coach of the seventh-grade boys team. This summer he added the eighth-grade team.

“It has been a ton of fun,” Cope said. “I have a great group of kids that come and work hard every day. I am very grateful for the opportunity and I want to thank Troy City Schools and Charles Henderson Middle School for giving me this opportunity.” 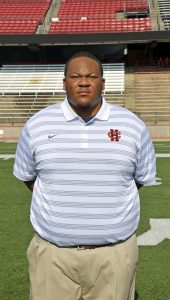 Photo/Mike Hensley
New Charles Henderson Middle School basketball coach Justin Cope has a special connection to his players through the game of basketball.

Cope is familiar with his players from his time coaching at a summer camp, and his goal is to teach them to be great basketball players

“I am used to being around the kids and working with them,” Cope said. “We are coaching them up to be better people and basketball players. We are always trying to build these kids into better students and everything else is just a bonus.”

Cope has been at the Director of the Summer Basketball Camp at the Troy Parks and Recreation Department for the past eight years and he has used that time to get to know and work with the youth of Pike County.

“It helps to get to know the kids,” Cope said. “It’s you first chance to meet them and get to know what you’re working with. When they come to tryout for the team, just by me knowing them, I know how much they work on their craft.”

After spending the last five years coaching the seventh-grade team, the first difference that Cope realized this year was how much bigger the kids are in eighth grade.

“The big difference is there is a lot more size,” Cope said. “These kids hit the weights and get big over the summer. You can tell that a lot of the kids gain and develop a lot over a year. A lot of these kids are only playing basketball for the second year and we are trying to increase their knowledge of the game.”

Cope is taking over for former head coach Shelby Tuck who left to become the high school basketball coach.

“My relationship with Coach Tuck is great,” Cope said. “He is a mentor and I would love to follow in his footsteps. He had an undefeated team and he established a winning program. We want to continue to do that here at Charles Henderson Middle School.”

The Trojans have started the season 1-2 and from now until the end of the season, coach Cope just wants to continue to see his players work.

“We want to win, but I also want them to improve every day,” Cope said. “The only team that I feel can beat us, is us. We have to work on the little things.”

Along with coaching basketball, Cope is also helped coach the receiver’s at Charles Henderson High School for seven years and also helped with the middle school football team.

The Trojans will be back in action this evening when they host Prattville following the conclusion of the girl’s game, which is scheduled to begin at 5 p.m.

Next level: Murphy signs with Wallace Community College of…