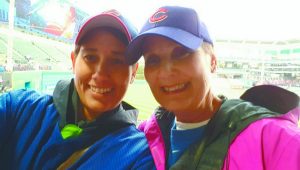 Long time Cubs fan Natalie Sutter and her mother Nancy Paulie saw dreams come true Wednesday when they made the trip to Cleveland to watch game two of the World Series.

Sutter and her mother have been Cubs fans their whole lives, so when the Clubs clinched a spot in the World Series they knew they had to make the.

“We were watching them beat the Dodgers and I turned to my husband and said, ‘You know we have to go,’” Sutter said. “We had the most fun. It was a once in a lifetime opportunity. We had fun from the beginning all the way to the end.”

Paulie grew up in Chicago, and Sutter learned to love Cubs from her. The opportunity to see their beloved Cubs play in the World Series for the first time since 1945 was one she wanted to share with her mother.

“I didn’t know what to expect of Cleveland,” Sutter said. “Everybody here has been absolutely terrific. The worse you heard was good-natured trash talk. Everyone has been super nice and helpful.”

The experience was exceptional, she said.

“It was so neat. We had smile on our face from the time that I picked her up from the hotel. We went straight to the hotel to get bundled up and decided to leave right then to go to the game. We exited right by the stadium and found a spot right by the stadium. It was the easiest in and out ever.”

Perhaps the greatest thrill of the night for the two was the opportunity to meet Cub great and Hall of Famer Ryan Sandberg.

“We were shaking the whole time,” Sutter said. “We walked by him talking on the cell phone, and we exchanged looks because he was much older. He was nice enough to take a picture with us. We couldn’t stop talking about it. We said even if we lose this game it was a win for us. We got to meet one of our heroes.”

But they were able to see the Cubs get a 5-1 win over the Indians, evening the series at 1-1. “It was wonderful,” Sutter said. “(Jake) Arrieta pitched a gem after a not so great outing last time. It was amazing.”

As for the rest of the series, Sutter plans to hit the road back home early Friday to ensure that she is sitting in her living room on time for game three.

“I am going to get in my car super early tomorrow so I can make it home for first pitch,” Sutter said. “Hopefully the Wrigley fans can see what we saw last night because they deserve it.”