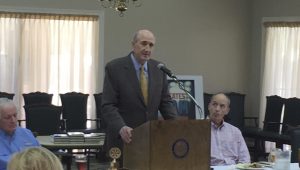 Messenger Photo/mike hensley
Former Miami Dolphin linebacker Mike Kolan was the guest speaker at the Troy Rotary Club meeting on Tuesday. Kolan spoke abou his days with the Dolphins and about his book “The Greatest Team: A Playbook for Champions.”

Mike Kolen was the guest speaker at the Troy Rotary Club meeting on Tuesday, discussing his book “The Greatest Team: A Playbook for Champions.”

A Birmingham native, Kolen starred at Auburn University where he graduated in 1970. He was the team’s co-captain as a junior and a captain as a senior and was named to the All-Century team.

Kolen was drafted by the Miami Dolphins and played there until 1977. During that time Kolen would be part of two consecutive championships, including the team’s undefeated season in 1972. During his eight seasons with the Dolphins, Kolen had the opportunity to play under the legendary head coach Don Shula.

“This man was phenomenal,” Kolen said. “He could have made any Fortune 500 company as the CEO and make it productive. He had a lot of attention to detail. He was a great coach, but he was a businessman. He ran his organization, the Miami Dolphins, like a business, and it paid off.”

Shula’s teaching inspired Kolen to write his book. In the book, Kolen breaks down the word “team” into four key traits: Trust, Enthusiasm, Attitude and Motivation.

“This book is just about that,” Kolen said. “Trust, enthusiasm, attitude and motivation. It’s not about the tangibles of tackling and blocking. It’s about the intangibles that are so key … It’s all about having trust, being enthusiastic, having a great attitude and being motivated out of love and respect for our neighbors.”

Trust is one of the more vital characteristics in every organization, he said.

Kolen said enthusiasm is most important for positive results in a team.

“You can’t experience any success unless there is enthusiasm,” Kolen said. “It’s so key that is be a part of an organization.”

“Attitude is so important,” Kolen said. “I look at other people and I certainly can’t blame them for my bad attitude. I can only look at myself. That is true with all of us. If our attitude isn’t what we wanted it to be, then whose responsibility is it? It’s really us when it boil downs to it … the attitude of a champion is spirit of service.

Kolen closed out the presentation with a question and answer segment.