Love of the game: Hartley finishes busy summer with tournament appearance and a college scholarship 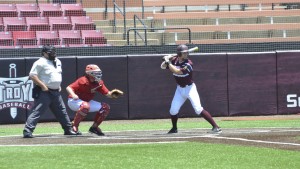 It has been a whirlwind of a summer for former Charles Henderson Trojan Chase Hartley.

“It is a great opportunity, and I am really looking forward to it,” Hartley said. “I had a chance to sign a scholarship, and I took it.”

Hartley played everywhere for Charles Henderson last spring: outfield, pitcher and first base. He batted .348 during his senior year and drove in 46 RBIs. As a pitcher Hartley finished with a 2.37 era and had 63 strikeouts in 65 innings of work.

Hartley has been a part of Post 70s 19U baseball team since he was 15 years old. This summer Hartley and Post 70 finished with a 31-11 record and advanced to the Southeast Regional Tournament in North Carolina.

“The summer was solid,” Hartley said. “It was a really good time. I was able to make some new buddies and being able to go to North Carolina was a great experience. I wish we were able to do a little better, but it was definitely a good experience.”

After spending the spring battling against one another, Hartley and some of his former rivals became teammates during the summer.

“It was fun,” Hartley said. “At first you may not love each other, but you get to where you really like each other. We are not much different. We all love the game.”

Hartley was able to play for head coach Rush Hixon, someone he grew up playing baseball with his whole life.

“He is my buddy I have played with him my whole life,” Hartley said. “I kind of took him more as a buddy. Because he is my age and I have played against him it was more of a buddy helping me out. I was able to take pointers from. He knows his stuff.”

Now with the summer over and school has begun, Hartley can look to the future. Although he does not yet know his role on the field, he hopes he can be versatile and help his team in any way that he can.

“I am hoping to be a utility player like I have always been,” Hartley said. “I like jumping around from position to position. I like to pitch as well. We haven’t talked about the roles just yet.”

Hartley hopes that his two years at Enterprise will open doors and he will continue to play the game.

“I want to do the best that I can and continue to mature,” Hartley said. “Hopefully I will end up somewhere else.”