GAME OF LIFE: Brothers share bond on and off the football field, shaping them into who they are today

From a 2003 football state championship to being named valedictorian, Chris Nickson left his mark on Pike County High School, and he carried that success all the way to Vanderbilt University in Nashville, Tenn.

His younger brother Isaac, who graduated PCHS earlier this year, did the same – standing out on the football field and in the classroom. And now, that little brother hopes to emulate his older brother’s success as he begins his football career at Alabama State University.

“It’s a blessing really,” Isaac Nickson said. “There aren’t too many people that can say they grew up with their role model. There were things that he did not on the football field but in the classroom. He was a valedictorian and one of the best athletes to ever come through Pike County. Just to have that figure in my life made a difference, a big difference.”

Football is a common interest between the two brothers, but their discussions amounted to much more than what happened between the white lines on a Friday night or Saturday afternoon.

“We were brothers first,” Chris Nickson said. “I think that’s what characterized our relationship to the fullest extent. We were brothers and became infatuated with one another. I always saw him look up to me throughout every process that I went through, from playing collegiate ball to even looking professionally. 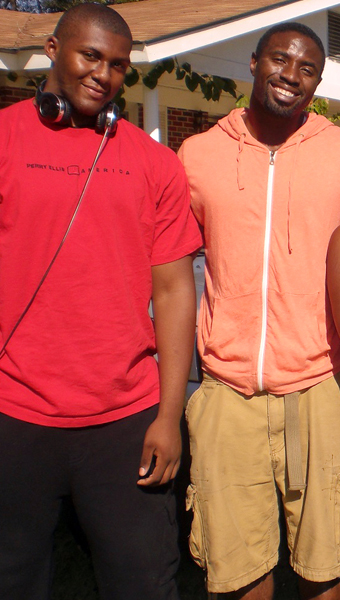 submitted photo
Isaac Nickson, left, and Chris Nickson, right, share a bond that extends well past the football field. The life lessons shared by both former Bulldogs have helped shape their lives outside of football.

“He followed me the entire time. It was interesting to be able to impart knowledge and a little bit of wisdom and be able to give him that model experience to help him along the way … We talked about spirituality, girls and life more so than we ever did football. Football always came second nature.”

One such instance when Chris imparted some knowledge to Isaac was not about anything that happened on the football field but whether what was happening in the classroom.

“I lived under his shadow and behind his shadow,” Isaac said. “I was trying to be like him. I came into a little slump in the classroom, and he found out about it and called me up and I told him I wasn’t taking things seriously. He told me that’s not what we talked about. He told me life only goes around one time and if you slack off you will slack off in everything. I never thought about it that way. What you do now will follow you into your future. If you work hard now you will be a hard worker in life. He told me that and I started to see an improvement in myself.”

Football for many people can be a way to teach younger kids life lessons; both the Nickson brothers understand the importance of playing sports.

“Playing ball is life,” Chris said. “…Not just football, but any type of competitive nature where you are giving and opening yourself up to others. You have to formulate yourself within a team. You have a group dynamic and your learning to interact with people. You are learning all the fundamentals and basics of life. You learn to deal with loses and failures. It is the primary tool.”

That is something that Chris always instilled in his younger brother.

“He told me a lot about football,” Isaac said. “He taught me that football is like life. Things you do on the field are things you can also use in life. He taught me things about sports and in life.”

Isaac spent four years dominating on the football field while at Pike County. He loved everything about the campus and playing for the football team because of the legacy that included his older brother.

“It was about the legacy that was left,” Isaac said. “My brother played on one of the championship teams. Everybody knew who Pike County was. It feels good to be a part of a program like that. When I found out that Coach Holland got the head-coaching job I was really glad because he was one of my brother’s coaches. Being in that atmosphere and knowing that I was around a person that knew how to win felt good.”

On Sept. 6 the two brothers were able to share in something else. Isaac and the Alabama State Hornets played Tennessee State in Nashville at Titan Stadium – the same place older brother Chris ended his career with the Commodores.

“It was really great,” Isaac said. “We were talking about it a few days before … about how he ended his career here and I am starting mine. I remember us both saying that it felt really good. The main thing was we are just trying to make Dad proud. Our Dad works so hard for us and he gets to see us do a lot of things that he couldn’t do. It’s just a great feeling to start and end our careers in the same place.”

Isaac is just in his first season with the Hornets in his first year at Alabama State. Chris hopes that he gets everything he can out of the experience.

“I hope he grows as young man,” Chris said. “That’s all that I can really hope for. I hope gets all the experiences that he hopes to have … At the end of the day I want him to walk out of there with his chest held high knowing that he gave it his best at something.”