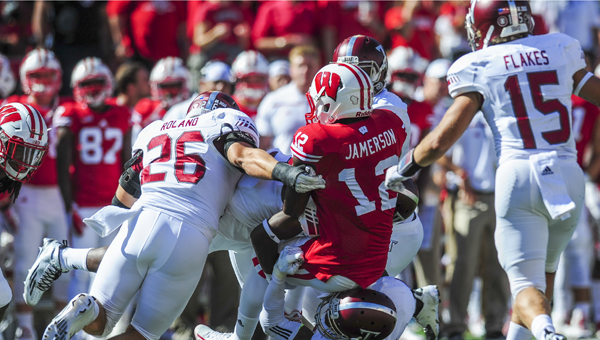 No. 24 Wisconsin took and early lead and never backed off as they defeated the Troy Trojans 28-3 on Saturday and earned their 34th straight home non-conference win.

The Trojans fell behind the Badgers midway through the opening quarter when the Badgers capitalized on a six play, 81-yard drive capped by a Dare Ogunbowale 17-yard touchdown run.

The Trojans were able to move the ball fairly well against the Badgers in the opening half, but failed to put the ball in the end zone.

The Trojans were outgained in the first half 246 to 126. Brandon Silvers, who was hurried and got picked up off the turf several times in the fist half, entered half time completing 11 of 17 passes for 62 yards.

Brandon Burks entered halftime as the leading rusher, rushing for 43 yards on 10 carries.

The Badgers were pinned back at the end of the first half by the Trojan punter Kay. The Badgers started their drive at the 10-yard line and went down the field in seven plays capped off by a four-yard run by quarterback Joel Stave.

Trojans came out in the second half and played a good half, but the deeper Badgers stifled the Trojan offense.

The Badgers stopped Troy to begin the third quarter giving the Badgers the ball at their own 33-yard line. The Badgers punched it in on the seventh play of the drive when Tanner McEvoy ran the ball in for a touchdown from 67-yards out.

The Badgers finished the scoring when Joel Stave completed a pass to Austin Traylor for a one-yard touchdown.

Silvers finished the afternoon completing 23 of 34 passes for 174 yards. Burks led the team in rushing with 62 yards on 19 carries.

Jarvis Bentley led the Trojans in receiving with six receptions for 58 yards.

With the loss the Trojans fall to 1-2 on the season. Troy now will enter their bye week before hosting South Alabama on October third in the first conference game of the season.

Photo/Joey MeredithThe Trojans will try to improve their record to 2-1 Saturday afternoon when they travel to Madison, Wis. to... read more