CHHS ‘puts it all together’ to defeat ACA 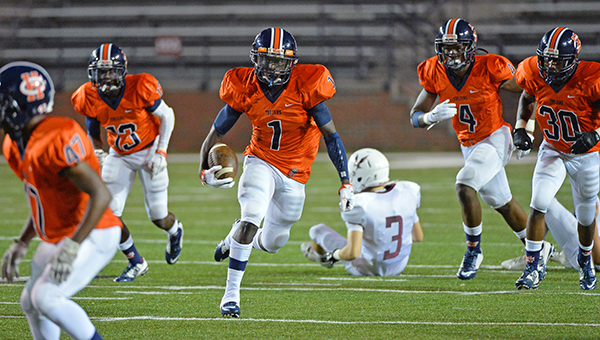 The Charles Henderson Trojans scored in five of their seven possessions of the first half Friday on their way to an easy 49-7 win over the Alabama Christian Academy Eagles.

The win for the Trojans improves their overall record to 2-2 and 1-1 within the region.

“They had fun and that was something that we encouraged them to try and do tonight,” said Charles Henderson head coach Brad McCoy. “With it being homecoming, there are a lot of distractions. I am very proud of them, they finally put it together.”

Quarterback Noah Lowery completed six completions in the first half and ACA had no answer for the Trojan offense. The longest drive of the first half was the first one, an 11-play drive that ultimately ended with a CHHS punt, the only one of the half.

The Trojans got on the board midway through the opening quarter when Bryson Gandy rushed the ball for 75 yards and a touchdown to give the Trojans the early lead.

Jabronski Williams had a rushing touchdown of his own on the next drive when he took the Lowery handoff for a 24-yard touchdown scramble.

The highlight of the first half came in the early stages of the second quarter when Lowery connected with Nick Lewis on a pass from 34 yards out to put the Trojans up 21-0.

After Lowery replaced former starting quarterback Gandy a few weeks ago, the coaching staff has worked to start implementing more pass plays into the offense.

“We were trying to put the ball in the perimeter tonight and try to get some quick throws inside,” McCoy said. “We gave him the opportunity to put the ball up top when the coverage allowed it. He was able to connect on some throws and the receivers were able to get some touches.”

Lowery continues to learn the art of the passing game and looks forward to seeing where the Trojan offense can get to this season.

“I feel like we are getting better every week,” Lowery said. “We are starting to throw the ball a little more. We have some really talented receivers. That should help us a lot.”

The Trojan defense was as dominant as the offense in the opening half. The Trojans held the Eagles’ scoreless the entire half. ACA had two drive extending plays on roughing and running into the punter penalties by the Trojans.

The defense kept right on ticking late in the second quarter when Kobe Griffin intercepted an Eagles’ pass and ran it in for the Trojans’ fourth touchdown of the game, giving them a 28-0 lead.

It wasn’t until the game’s final minutes when the Eagles were finally able to get on the board.

The biggest play for the Eagles all night long came late in the third quarter on a pass play for 43 yards.

“We had a few distractions this week but for the most part I think we came out and accomplished the goals that we wanted to accomplish,” said Charles Henderson Defensive Coordinator Chuck Dunn. “I was very proud. We were short on numbers on the defensive line. The front four guys played extremely hard.”

Jalante Smith had a huge first half scoring from 21-yards out to extend the lead for the Trojans to 35-0. Smith also had a punt return for over 50 yards down to the three-yard line and two returns for a touchdown called back on a holding call and a roughing the punter call called on the Trojans.

Lewis closed out the scoring in the first half with his second touchdown of the night, catching a Lowery pass from the 3-yard line to give the Trojans a commanding 42-0 lead at the half.

The second half began the same way the first one ended, with a Trojan touchdown. The Eagles received the second half kick and muffed it giving the Trojans the ball on the five-yard line. Jared Wilson mopped up the rest by scoring on a run play from five yards out to give the Trojans a 49-0 lead.

After the Trojans scored, McCoy used his bench and brought in Brock Huner midway through the third quarter and allowed most of the junior varsity players to play the rest of the game.

Lowery finished the game throwing for 130 yards on 9 completions and two touchdowns.