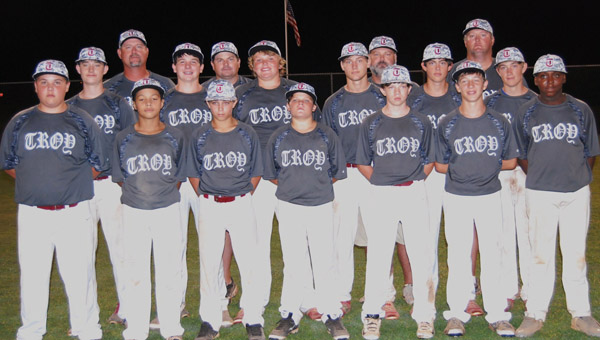 Since the beginning of May, the Troy Junior Dixie Boys have patiently been preparing for their shot to compete in the Alabama State Tournament. Their wait comes to an end this weekend.

“I think we are about ready as we can get,” said head coach Kevin Bryan said. “It is hard practicing, practicing, and practicing without having any competition. These guys have handled it really well though and they have come out and gave a really good effort.”

The Junior Boys began the summer by competing in the Alabama State Games in Dothan back in early June. Troy finished that tournament with a 1-2 record after practicing as team just four times.

‘”After three or four practices I wasn’t too disappointed by how the team performed. I thought we could have won all three of the ball games,” Bryan said.

Since then, the Junior Boys have been on the practice field, focusing on live pitching and hitting.

“We have brought in some people to help out with our pitching,” Bryan said. “We have been doing some extra batting practice and doing some fundamental work in the field.”

One other way the Junior Boys have tried to stay fresh is to schedule scrimmages with the Troy Dixie Boys, another team that has not seen any action since the Alabama State Games.

The two teams have scrimmaged a handful of times this summer, the latest scrimmage between the two teams brought better baseball for Bryan and the Junior Boys.

Bryan said he has seen marked improvement since the beginning of the summer.

“Based on the last few days of practice, and the pitchers throwing good bullpen sessions, they seem to be coming around at the right time,” Bryan said. “You don’t want to be hot early and then get flat and tired around tournament time. We tried to pace these guys, and I think and hope when Saturday gets here it will be the right time and they will be on top of things.”

The Junior Dixie Boys will be one of eight teams in the field over the weekend.

Bryan got to see a sneak peak of what Auburn has to bring on Sunday, when Auburn scrimmaged the Dixie Boys 14-year-old team. Bryan described Auburn fundamentally sound.

With the tournament being played in Troy, it gives Troy the opportunity practice in their own surroundings as well play in front of their home fans.

“For these kids to compete at this level at home is very special,” Bryan said. “You have the home field advantage with your home fans. This baseball community really supports each other and we are hoping it works out where we can go out and support the 14-year olds as well.”

One advantage the Junior Dixie Boys may have is that they have had the opportunity to practice on the all-dirt infield that the state tournament will feature.

“The ball is going to faster,” Bryan said. “ Your going to get more hits because the ball will get through a little faster. You will also have to work on the different hops you will get with dirt. After the first day the difference will be minimal because everyone would have played on it.”

Pike County High School has a new girls basketball coach. Todd Reynolds will take over the reigns in 2015 in... read more