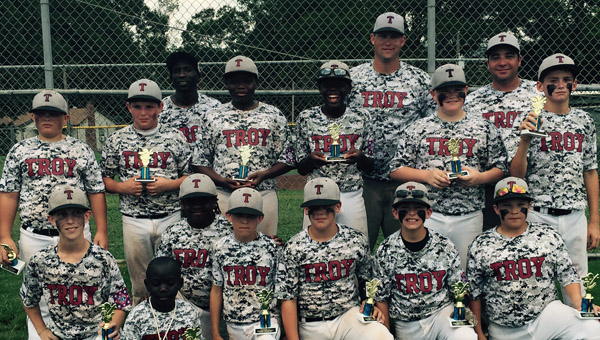 The Troy Ozone Rookie team advanced to the finals of the State Tournament and played in a best two-out-of-three series against Enterprise to determine the champion. After the two teams split the first two games on Tuesday, they met up Wednesday morning in the deciding game three.

The Rookies put up a good effort, but ultimately the team fell in game three 11-6 to Enterprise.

“It didn’t go the way we wanted it to, but we played good,” said head coach Christopher Huner. “We didn’t hit the ball the way we have been, and we faced a pretty good pitcher.”

It was the second time the two teams have matched up in a best two-out-of-three series. The two teams met up in the District Tournament where Enterprise once again got the best of the Rookies.

“I think the two teams are pretty equal,” Huner said. “They beat us a few more times than we beat them, but other than the first game in Troy they were pretty close games. Our boys are very familiar with there players they played them in travel ball and in previous seasons. There is a lot of competitiveness between the two towns, and both of us have good programs.”

In both of the games leading up to game three Enterprise jumped out to an early lead in the first inning, and that trend continued Wednesday morning.

Enterprise jumped out to a 3-0 lead on four hits, including two doubles. Troy didn’t help themselves in the inning either having three passed balls and a walk in the inning.

After Enterprise tacked on another run in the second, they scored five runs in the third to jump out to a 9-0 lead.

Walks and passed balls continued to plague Troy as they walked a total of five batters in the third and there were eight wild pitches or passed balls.

Troy came to life a bit in the third scoring two runs putting them on the board. KenCorious Boykin led off the inning with a base hit; he came around to score on a triple by Brady Barron.

JD Wilson drove in Barron on a groundout to the short stop.

Enterprise increased the lead in the fifth inning to bump up the score to 11-2.

Troy made a valiant effort in the bottom of the sixth inning, but still fell short. Barron and Wilson started the inning by getting on base via the walk and a base hit. Barron would later come around to score on an error.

Noah Prestwood and Brady Huner both had singles in the inning. Huner’s base hit drove in both Wilson and Coby Johnson.

Barron also scored earlier in the inning when Johnson reached base on an error.

With runners on base, Quay Rodgers flew out to center field to end the game and the tournament.

Troy finished the game with six hits on Wednesday; Prestwood, Huner, Boykin, Barron, Wilson and Johnson all had hits for the Rookies.

“It was a great summer,” Huner said. “These guys have been playing baseball for six months. They have came along way since the warm up Jamboree, and I believe we were peaking at the State Tournament.”

Champions: Post 70 15U team wins championship in the State Tournament over the weekend in Dothan

Photo/submitted photoPost 70 finished its 2015 summer seasson on a high note by winning the State Tournament in Dothan over... read more