soccer camp: British soccer camp comes to Troy to have fun and teach the game of soccer to local kids 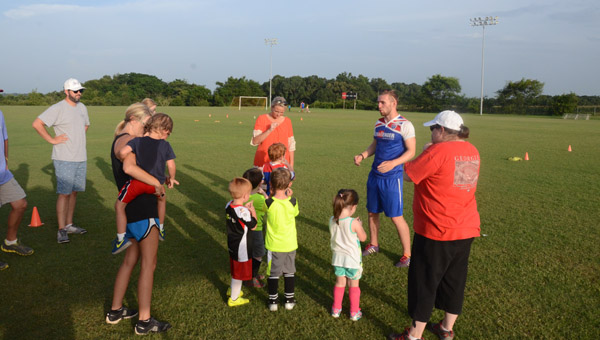 Photo/Mike Hensley
From July 6 through July 10 the British Soccer Camp is in Troy to teach young kids the game of soccer. Kids have the opportunity to learn different soccer techniques during the week-long camp.

The popularity of soccer in the United States is at an all time high after the success of the men’s team in the FIFA World Cup in Brazil and of course the winning of the World Championship by the U.S. women’s team.

And local players who aspire to join those ranks some day are participating in the Troy Parks and Recreation Department’s soccer camp this week under the tutelage of Stuart Bryson and Bradley Grime. The pair is two of nearly 120 soccer players from the United Kingdom who are traveling across the Southeast teaching the game of soccer at different camps.

“It’s a lot of fun,” Grime said. “We want them to keep playing the game of soccer. For the younger kids you have to make it fun for them, while with the older kids it’s more teaching the game to make them better.”

The sport’s growing popularity makes for willing students in the United States.

“The kids respect soccer more over here than they do in England,” Grime said. “It’s because its not as big over here as it is in England, Over here its mainly baseball, basketball, and football so when the kids over here play it they respect it more.”

The participants of the camp are going through many different drills to improve their skills in the game, including passing, heading, and dribbling.

“We want these kids to get better at playing soccer and to have the confidence to keep playing,” Grime said. “We hope they come back each year to keep getting better.”

While Grimes is teaching the 6- to 14-year-olds this week, Bryson is introducing 3- to 5-year-olds to the sport, often for the first time.

“We are trying to have them have as much fun as possible out here,” Bryson said. “Because they are so young we are not trying to improve their skills, we are just trying to get them used to touching a ball.”

Relay races and many different games are some of the things being featured for the younger kids of the camp.

During the five weeks Bryson and Grime have been in the United States they both have been amazed at the popularity of soccer.

“We have already seen a number of girl participants because of the female world cup and the success that the Americans had,” Bryson said. “The more they start to come out here and learn the basics, the more they get involved in soccer. It’s such a great game.”

With just two days remaining in the camp the two counselors are hoping to have a lot of fun to close out the camp.

“We want to keep having fun a lot of our games were without soccer balls,” Bryson said.

“What we do is slowly add soccer balls to the games, so they can learn.”