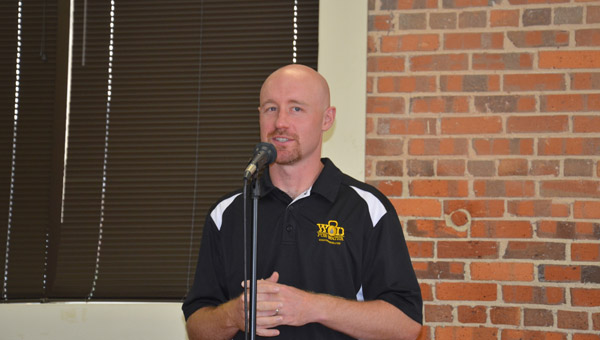 Irons accepted the head-coaching job at Oak Mountain High School in early June. Tuesday, Irons said he was thankful to have been in Troy for so long.

“It is great to see everybody,” Irons said. “It means a lot to both me and Leslie to have all these people come out to show their appreciation for the things that have happened over the last seven years. Troy has a great place in our heart and it always will.”

Being the Christian man that he is, Irons made a big impact in his church at Troy First Baptist, a place that has made just as large of an impact on him and his family while in Troy.

“First Baptist has meant so much to us,” Irons said. “This is where are kids were born and dedicated. Leslie and I have grown so much. I have met so many people here that challenge both my faith and me.”

The seven seasons Irons spent at Charles Henderson could be defined in one word–special. Beyond the state championships and win, loss record, Irons touched many people’s lives through out not just Troy, but Pike County.

“Derek Irons is a brother in Christ,” said Pike County Probate Judge Wes Allen. “We are losing a man from this community. The impact he has made on Charles Henderson and the City of Troy has been great. Troy and Pike County are really losing a leader. We are sad to see him go.”

Multiple former players attended the reception to honor Irons and celebrate the success the program has had during Irons’ tenure.

Austin Ingram, Chase Smartt and Reilley Fox were just a few Trojan players that were in attendance to honor Irons.

“Coach Irons affected me greatly. He is a great man,” Fox said. “He was a great coach and great guy to look up to. I can say he was my role model. He is someone I can watch and learn how to look at life as I grow older in my faith and baseball career.”

“Most importantly, I will take away what I learned off the field from coach Irons,” Fox said. “He is a great family man, and that’s one of the main things that I took away from coach Irons.”

Although Irons is leaving Charles Henderson and Troy, it doesn’t mean he won’t take the lifelong relationships that he has made with him.

“We are going to miss this place a lot,” Irons said. “At the end of the day the relationships are what I am going to take with me. That is why I coach and why me and Leslie do the things that we do. Although we are leaving Troy, we are not leaving the relationships. We will still be there for our players for weddings and all that along the way. That’s the really good thing about it those relationships will change but they will still be there. That’s one thing that makes this a little easier.”

The Pike County Bulldogs football team is spending the summer hitting the weights and the field in preparation for the... read more