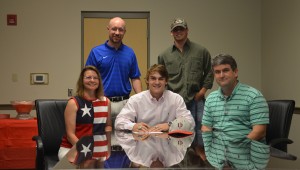 Reilly Fox has dreamed his whole life of being able to play baseball at the next level, and Wednesday his dream became more of a reality.

In front of friends, family and coaches at the Sportsplex, Fox signed a scholarship to play baseball and attend Jefferson Davis Community College in the fall.

While playing at Charles Henderson, Fox was a member of two state championship teams and his work ethic and leadership skills contributed to the Trojans success.

“Reilly has been a leader and a role model for our program since his first time on varsity,” said Fox’s former head coach Derek Irons. “I have never had a player work harder than Reilly. That goes from the first work out in August until the final game of the season.”

The hard work and determination Fox put on display in his time with the Trojans is something he plans to carry with him to the collegiate level.

“The only thing I can promise is I will work hard everyday,” Fox said. “My dedication will be like it always has been, I will come ready to work everyday.”

But, Fox said he plans to bring more than his grit and hard work with him to Brewton when he attends school in the fall.

“I have always been really strong defensively in the field,” Fox said. “ I hit the ball really well this year. I do want to get stronger this year to be able to hit the ball a little farther.”

Fox closed his high school career on a high note finishing his senior season batting a .403 and earning 26 RBIs for the season.

Those skills both offensively and defensively are something that Irons believes will help give Fox a smooth transition to the next level.

“He is going to step in and be an instant catalyst for their program, in every phase, in their workouts, in the class room and on the field,” Irons said. “He is going to bring a lot to that program. On the field he is very versatile. He started with us at second base, but I feel like he could play anywhere on the infield, and he can play a little bit in the outfield as well.”

Fox’s versitility in the field and in the lineup is something that will play a big role at the next level, Irons said.

“That is so valuable, especially at the college level to have a guy that can fill a lot of roles. If you have injuries he can move around,” Irons said.

According to both Fox and Irons, the plan for Jefferson Davis will be to use Fox somewhere in the middle of the field playing second base and shortstop while also giving him playing time in the outfield as well.

Fox attributes much of his success to the influence of both of his parents, Gary and Sheree Fox.

“I couldn’t thank my family enough,” Fox said. “Watching my parents and how they look is a big impact on how I act. I am involved with activities at church and school. The only thing that got me to where I was at was my parents.”