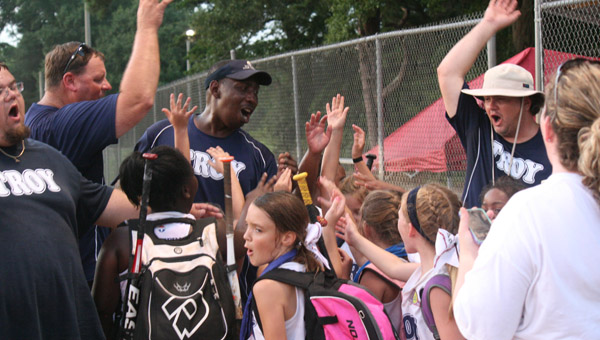 The Troy Dixie Darlings won in dramatic fashion Monday night in the Sub-District 1 Tournament in Luverne. The Darlings secured their ticket to the championship round with a 9-8 win over Andalusia.

“It was a good game for us,” said Darlings head coach Shane Griffin. “We got behind early 5-1, and we kept fighting back. We had a big third inning, and we got the winning run in the sixth.”

After the first two innings, Troy found themselves down 5-1 against Andalusia putting them behind the eight-ball early. After the Darlings cutting Andalusia’s lead to just one run, the Darlings had the table set for a last inning comeback to seal the win for Troy.

With the game tied at eight, Addison Armstrong smacked a base hit scoring Madison Allen giving the Darlings the victory, Griffin said.

Griffin said several of the Darlings players hit well Monday evening propelling them to a victory and putting them in the championship game.

“We got off to a slow start hitting the ball,” Griffin said. “But, from the third inning on, our offense really worked. I think the key of the night was a defense. We never threw the ball away all night. We played a real good defensive game.”

Allen went a perfect three for three at the plate. Armstrong and Paitin Riley goign two for two at the plate as well.

Monday evening’s win for the Darlings continued a successful trend for the team from Troy, Grifin said. After falling to Andalusia in game one 13-6, the Darlings battled back and swept both games on Saturday, defeating Luverne 2-0 and Zion Chapel 15-11.

With the win the Darlings have a championship matchup tonight against Opp at 6 p.m.

In the double-elimination format, the Darlings would have to defeat Opp two times to be declared the Sub-District Champions.

Both the Darlings and Opp have already advanced to district play.