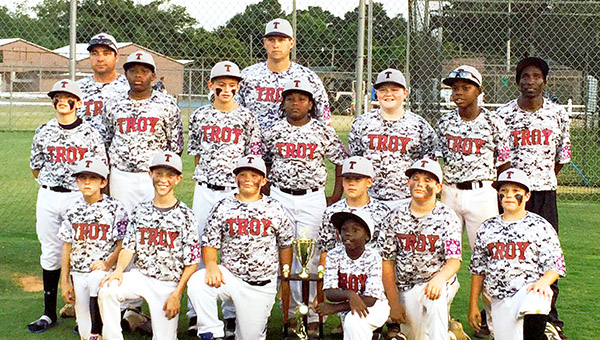 The Troy Ozone Rookie team fell short in their District Tournament against Enterprise over the weekend.

After several teams were dropped out of the tournament, the Ozone Rookie team and Enterprise were left to battle in a best two-out-of-three series, but Enterprise took the series in two straight.

Enterprise won game one on Friday 21-10 forcing Troy to win the two remaining contests against Enterprise, however, the team fell short in the second match up losing 6-5 Saturday.

After leading all game long, Troy came up one-run short when Enterprise scored the wining run on a balk call with two outs in the final inning of the game.

“We played really well this weekend,” Huner said. “We looked like a completely different team then we did on Friday night. We looked a lot more like what I expected to see. We pitched better. We only walked four batters in the game Saturday.”

After being outplayed Friday night, Huner said he saw his team play more like the team he recognizined and expected to see on the field Saturday.

“I was really pleased to see them bounce back after that game Friday night,” Huner said. “That was not what I expected and it’s not what they expected either. Enterprise is a good team, and they will be going to state as well. We had them on the ropes from the beginning of the game.”

Despite the loss, Troy started the game off offensively scorign putting three runs nnon the board after Adrian Carwell hit a two-run home run.

Enterprise echoed a run back to Troy in the bottom of the first inning, but Troy tacked on a fourth run just shortly after in the top of the second.

Enterprise levled the playin field tying the game with a two-run homerun.

Troy was able to brielfy retake the lead in the top of the sixth when Coby Johnson, who reached on a single, scored on a failed pick-off attempt at first base.

Enterprise had their first two batters reach base in the bottom of the sixth inning and tied the game on a ground out.

In all, Troy had six players record a hit on Saturday. Noah Prestwood, Brady Huner, Cardwell, KenCorius Boykin, JD Wilson and Johnson were all credited with basehits in Saturday’s game.

As the tournament runner-up, Troy will advance to the State Rookie Tournament, which will be held July 9-14 in Oxford, Ala.

“That’s what we are going to shift our focus to. The majority of their batting practice will be against one of their teammates pitching that way they both get their work in.”