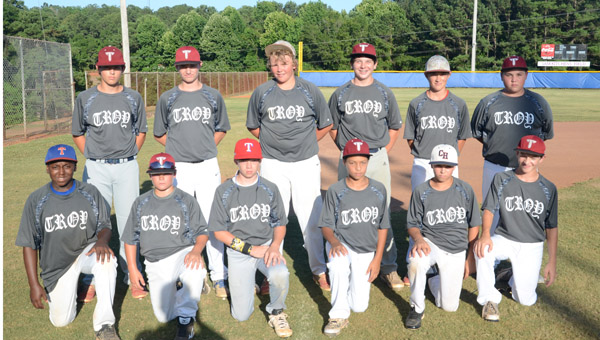 The Troy Dixie Junior Boys Tournament team is fresh off a tournament in the Alabama State Games in Dothan. Although the team did not win the tournament were able to play with each other for the first time in competition.

Troy finished the weekend with a 1-2 record, after defeating Ozark 5-4. In the two losses for Troy, The Dixie Boys lost by 3 combined runs.

After practicing only four times as a team leading up to the tournament, head coach Kevin Bryan was pleased with how his team performed.

“After three or four practices I wasn’t too disappointed by how the team performed. I thought we could have won all three of the ball games,” Bryan said. “We are just now starting to get together and getting our practices in to get ready for the tournament in July.”

The strength of the Dixie Junior Boys team early in the tournament has been their offense and their ability to put the ball in play, and putting pressure on the defense.

Playing in the field and knowing one another has been the biggest issue early on for the Junior Boys.

“Playing together in the field is something we need to work on,” Bryan said. “Once we get together a little bit more they will be able to make plays and know what each other can do.”

The pitching staff will improve once players are able to log more innings, especially the ones that weren’t able to pitch as much during the regular season.

Bryan believes that getting to know each other and learning each other tendencies will not be a problem after being able to practice over a longer period of time.

“We have a lot of time to work,” Bryan said. “We have a strong group of young men so it’s just a matter of practicing and working out all of the kinks.

The Dixie Boys are currently preparing for the State Tournament in Troy July 17.

Photo/Mike HensleyThe 2015 Ozone Rookies are getting prepared to make a run in the District Tournament and beyond. Back row,... read more