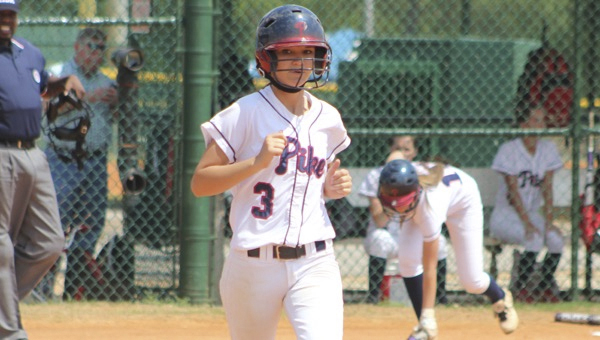 After hitting over .500 and earning The Messenger’s All-Area Player of the Year honors in 2014, anyone would be hard-pressed to repeat that performance.

But Pike Liberal Arts’ Kayla Benton booked a .511 batting average and led her team to the state playoffs in her senior season, earning the 2015 All-Area Player of the Year Award.

“Kayla is what you want out of a lead-off hitter,” said John Ramage, president of the Pike Liberal Arts School Booster Club. “She rarely got out, she was always on base, and when she hit a single you could almost guarantee her going to second if not third. She was probably the fastest runner on the team by far.”

Along with hitting .511 Benton finished the 2015 season with 70 hits, which led the team. Of the 70 hits, Benton hit 29 extra base hits tying with Sam Yarbrough for the team lead in that category.

“She was the prototypical lead-off hitter. She could swing the bat and get on base,” Ramage said. “And, she was really tough on the base path once she got there.”

Benton was part of a lineup that sported a team batting average of .369.

Benton, along with Bailey Rushing and Yarbrough made up a three-player attack that combined to hit .496 for the Patriots.

“Our lineup one through seven was really tough. It was like facing Murders Row,” Ramage said. “We were really proud of our girls this year. They did a really good job.”

Being a senior, Benton was a leader for the Patriots all season long, setting the tone both offensively and defensively. She was not one to shy away from setting an example for all of her teammates.

“She was senior, so she was our leader,” Ramage said. “She was one to lead by example. When the girls got down or needed to pick it up, she would get on them.”

“Your best player can’t always lead just be example, not all of players will pick up on that,” Ramage said. “Sometimes you have tell them to do things, and she was one of those who could do that. I loved the way she conducted herself. You could tell she was very good and everyone knew; and yet she still delivered when she needed to.”

Benton closed out the 2015 season by being named to the Alabama Sports Writers Association’s AISA All-State second team.

Amy Warrick of Goshen wins Coach of the Year Award

After a year-and-a-half at Goshen and two playoff appearances, softball head coach Amy Warrick was named The Messenger All-Area Coach of the Year.

“I could not have done anything this year without my assistant coaches,” Warrick said. “I accept this award on behalf of my coaches, I have great assistance coaches that may not help me coach on the field as much but they help and support me.”

Warrick led the Eagles to an 18-11 record and an appearance at the state tournament, after winning the Class 2A South-Central Regional Tournament.

“This is the first year I was the head coach all the way through,” Warrick said. “After a slow start and a hard schedule we changed the defense around and we peaked at exactly the right time.”