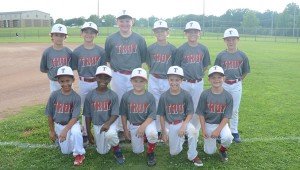 Even though the Troy Parks and Recreation baseball league is over, there is more baseball left to be played at the Troy Sportsplex. The 2015 tournament season is under way, and coach Adam Brookins and the AA pitching machine team are gearing up for an exciting tournament season.

“It was fun to play with their friends during the regular season. Now it’s like they’re a Major League player, being able to play someone from another town,” head coach Adam Brookins said. “They really get a kick out of this.”

After a long season of recreation league play, these players and coaches get to continue to practice and learn the game over the next few weeks.

“You’re able to teach these kids more,” Brookins said. “You can make things more difficult and they will be able to adapt to anything you throw at them.” 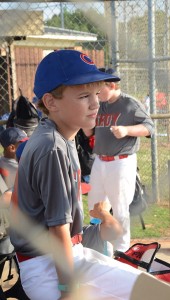 Rhodes Baker sits on the bench awaiting the start of practice.

Brookins said his team is a good team ready to play and have fun over the next few weeks.

After all the practice and hard work by these kids and coaches, this summer provides these players the ability to show off their skills at a higher level.

“These kids have worked so hard throughout the season, this is just a blessing to be able to be out here an extra two to three weeks with these kids,” assistant coach David Bradford said. “They really enjoy baseball and having a good time. They are working really hard to get ready for the District Tournament.”

Well beyond the importance of scores and stats that all these teams will put up, will be the fun and friendships they will make over the next few weeks. Forging memories and friendships is the true meaning of summer baseball.

The players are not the only one’s that get a lot out the these tournament seasons, the coaches have the opportunity to have a little more fun as well.

“We enjoy it because we get to learn about new kids; kids that we didn’t have on our team during the year,” Bradford said. “The part I love the most is seeing old faces and getting to hang out with the old kids. I love it because you make memories and bond with these players.”

The AA Pitching Machine team will travel to Enterprise on June 19 for the District Tournament.

The 20-plus miles that Greg Price runs everyday is something that comes second nature to the 41 year-old Chief-Technology Officer... read more