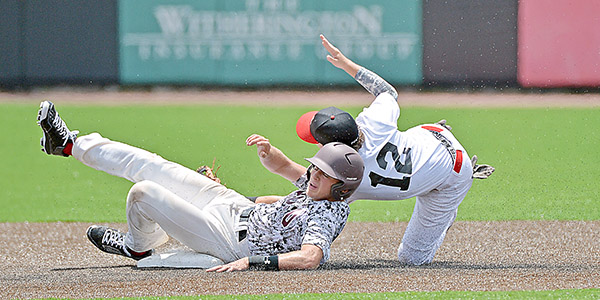 The American Legion Post 70 baseball teams fell short in the summer season’s first tournament in Troy over the weekend.

The Post 70 Invitational was a three-day tournament that took place at Riddle-Pace Field, and Charles Henderson High School.

The three teams finished the weekend with a combined record of 6-4-1.

In the 15U tournament Americus Travelers walked away with the Championship, with Tuscaloosa Post 34 coming in second.

The Gulf Breeze Dolphins took home the championship in the 17U tournament.

“It was an early morning start and I think we were sluggish in the early innings,” said head coach Nick Collins. “Their pitcher did a really good job of keeping us off balance and we were guessing at the plate. We were finally able to string together a few hits off their relief pitcher and managed three runs in the fifth, which was the difference in the game.”

The Black team had a quick turnaround and was forced to play again Saturday night. It was a 2-1 loss to Gulf Breeze.

“It was a game of missed opportunities for both teams. There always seemed to be runners on base, but pitching and defense was great all night,” Collins said.

The Black squad had a chance to take the lead in the sixth inning but couldn’t get the big hit they needed. Gulf Breeze was able to take advantage; however, they took the lead with a two-out hit in the seventh inning.

“We just weren’t as aggressive as I would like us to be and they played with more energy,” Collins said. “I think that was the difference in the game.”

After being up 4-1 going into the seventh inning, the 17U Black team surrendered three runs ending the game in a tie.

In 17U Maroon’s lone win on Sunday, they defeated the Alabama Prospects 3-2. They scored two of their three runs in the first inning on Sunday.

After a leadoff walk by Devan Suddith, Jabronski Williams reached on error advancing Suddith to second base.

With Suddith on third base, Hunter Jones hit a sacrifice fly to right field scoring Suddith for the games first run.

Willams scored the inning’s second run when Charlie Tisdale reached base on an error.

In the sixth inning the Maroon team tacked on a final run. After another leadoff walk, this time to Reed Jinright, Suddith laid down a sacrifice bunt advancing Jinright to second.

The winning pitchers for the 15U were Dalton Adkinson, Nathan Renfroe and Elliot Baxter.

“I thought we had a successful performance this past weekend. This team met for the first time Last Monday night and really only had one true practice before playing in this tournament,” said 15U head coach Brett Price. “So for us to come away with three wins and one loss were results I was really pleased with.”