The American Legion Post 70 started gearing up this week for a summer full of baseball.

Post 70 will have four teams for this summer’s season, doubling what they had a season ago. Post 70 features a 15-under, two 17-under teams and a 19-under team.

The four teams feature players from all over the Pike County area.

“We just got cranked up this week, we had tryouts a week ago Sunday, and started practicing on Tuesday,” Post 70 head coach John Rushing said. 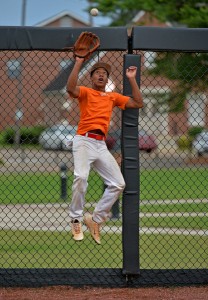 The 15-under team, along with both of the 17-under teams, will be in action this weekend in the Post 70 Invitational.

One 17-under team will be comprised of a showcase team, while the other will be considered the American Legion team.

“We really left it up to the players and the parents,” Rushing said. “ It really depends on how much time you want to dedicate to it. The showcase team will play games on the weekdays, some people want to do that in the summer and some don’t.”

Along with the two 17-under teams, Post 70 also has a 15-under team. Their season will run from Friday through the state tournament July 10-14.

Finally, the 19-under team features a regular season that starts on June 2 and runs through July 19. The state tournament at the end of the regular season will be played starting on July 24 and ending on July 27 in Troy. If Post 70 advances past the state tournament, they will have the opportunity to play in a regional tournament, where they will play for the opportunity to play in the American Legion World Series.

“This is my 20th year in American Legion baseball, and this is the first year I have all 18 and 19 year old kids,” Rushing said. “I think we have one kid that will go back to high school, but all the rest of them will go to college.”

The 19-under team will have the opportunity to take a road trip and partake in both baseball and fun.

“We are having a 10-day trip, where we will go to Columbia, Tenn. for two days,” Rushing said. “From there we will go to St. Louis and watch a Cardinals game. We will go and watch two games from the College World Series in Omaha, and then play in a 66-team tournament.”

America Legion baseball has been going on since 1925 and has given kids the opportunity to continue learning the game of baseball.

“Its always good for these kids to have something to do during the summer. The thing I love about American Legion baseball is that at the 19 and under level, they have a National Champion,” Rushing said. “You have to be the champion at the state to go to regionals, and you have to be the regional champion to go to the national tournament.”

The Post 70 begins play today. The tournament consists of an eight team round robin, before the championship on Sunday. The Post 70 17-under Maroon team takes on Wiregrass Sports Academy at 5 p.m. today at Charles Henderson High School. The 17-under Black team plays Central Alabama Prospects at 7:30 at the high school. The 15-under team will face Dothan Post 12 at 7:30 p.m. at Riddle-Pace Field.