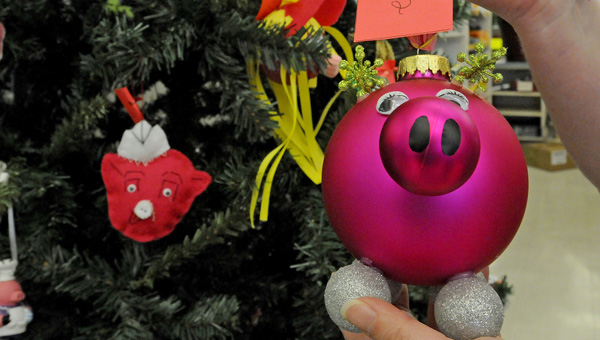 Ornaments are seen on a Christmas tree at the Piggly Wiggly in Troy, Ala., Thursday, Dec. 15, 2011. (Messenger Staff Photo/Thomas Graning)

Oinkament contest is a hit

Let there be pigs on Earth, this Christmas.

That was Jennifer Garrett’s thought when she asked the community to participate in creating pig ornaments for a contest this year.

“It’s the Oinkament Contest,” laughed Garrett, owner of the Piggly Wiggly on U.S. 231 in Troy.

Garrett was shopping for pig ornaments for the store Christmas tree when her friend suggested she ask the community to contribute handmade pig ornaments as part of a contest.

“Their imagination was the limit. It could be any kind of material they wanted to use,” Garrett said. “It just had to be normal tree ornament size, and ready to hang on the tree.”

Now pigs of every color and personality grace the tree at the grocery store on U.S. Highway 231. Paper, cardboard, felt, foam, pipe cleaners, glass, tissue and glitter have all been fashioned into ornaments that Garrett will keep and display again on next season’s tree.

Employees crafted decorative pigs, too. There’s even a pregnant pig that was hung on the tree by a pregnant employee. However, it’s the 14 community contestants who brought in Christmas pigs that will be eligible for prizes.

Entries were separated into three categories. Crafters ages 4-9, 10-15 and 16 to 100+ will find out toward the end of the month who will take home Piggly Wiggly T-shirts and gift baskets.

Shoppers who visit the store can vote for the best entries until December 22. If a voter chooses to, they can list their name and phone number on the voting slip to be entered into a drawing for a prize.

Garrett said she hopes to continue the contest next holiday season.

“It’s been fun watching the customers come in with their pigs, and other people will have a better idea of what to do and how fun it can be, next year.”