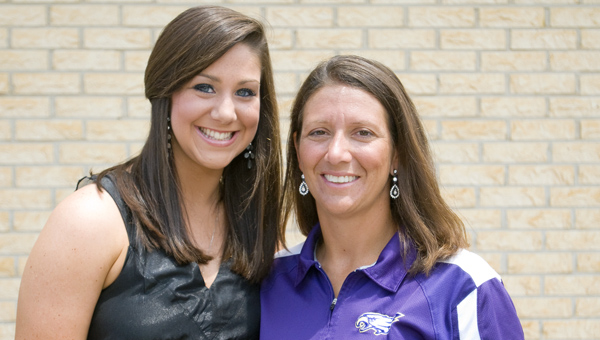 For the past couple of years, the Goshen softball program has experienced success, but was rarely acknowledged for it outside of Pike County.

After a record breaking 2011 season, however, that was not the case.

While the Eagles’ hopes for a state championship may have fallen a few games short at the state tournament this past May in Montgomery, the team reached that destination for the first time in the program’s long history.

And now, there are three more honors to help highlight the Eagle’s season.

Both Alli Warrick and Rachael Senn were named to the Alabama Sports Writers Association’s All-State team, with a first team selection and an honorable mention selection.

To go along with those honors, head coach Dee Hughes was voted Coach of the Year in 2A by the association.

“It’s just amazing to be recognized out there coming from a small school,” Hughes said.

“A lot times, this kind of recognition goes to the state champs, so it is really an honor to not only win this award but to be with this team and help them get to state and win at state. A lot of people put a lot of hard work into this season, and I am just proud to have been a part of it all.”

The Eagles finished with a 30-11 record, which were the most victories in a single season. Goshen also clinched its area title for the second-straight year.

“Even though we were falling short the last couple of years, I think people knew this team was building up to something,” Hughes said.

“This season and these accomplishments really show the amount of work everyone put in over those years. You can’t have a season like this over night. It’s been a building process, but each year we have been getting better and better.”

While this is the first time Hughes has been named the top coach in the classification, it came as no surprise to her team.

“(The players) have always thought of coach as the best coach in 2A,” Warrick said.

“We have all played for her for forever, and she has always been there for us. We have always felt like she was one of the best coaches around and we didn’t expect anything less – it was not that big of a surprise to us when we found out, because we know how good she is.”

Along with Hughes, while each player on the team played a huge roll in this season’s success, Warrick was one of the key components as the team’s No. 1 pitcher.

And she did not let her team down.

She finished with a 26-11 overall record and a .094 ERA and 30 complete games to go along with five no hitters and five shutouts.

“It’s pretty high praise,” the raising senior said with a smile about the first team selection.

But like Warrick, Hughes was not surprised when the honor was announced.

“I wasn’t surprised at all,” the coach said. “I knew Alli’s stats were up there with the best all year.

“We played so many good teams like Alabama Christian, Northview and Trinity, where she threw two-hitters. When you are throwing that well, game after game, it showed where she was. She really had a great season.”

Like Warrick, Senn had a big season for the Eagles, especially at the plate. In just 99 at bats, the raising senior led the team with a .455 batting average and 27 RBIs.

She also finished with 45 hits, 10 of which were doubles, and 34 runs scored as well.

“She is a consistent ball player,” Hughes said of Senn. “You know what you are going to get out of her before every single game. She’s a quiet person, but that is her role. She has been an integral part of this team and one of the big leaders.” This is not the first time either Warrick or Senn were named to the selections, as both were voted on as Honorable Mentions by the association two years ago.

“Rachael was one of our leaders,” Warrick said.

“She was my catcher and would always make sure that I kept my composure. She was right there with me every pitch, she knew what I was thinking for every pitch – she was my right hand.”