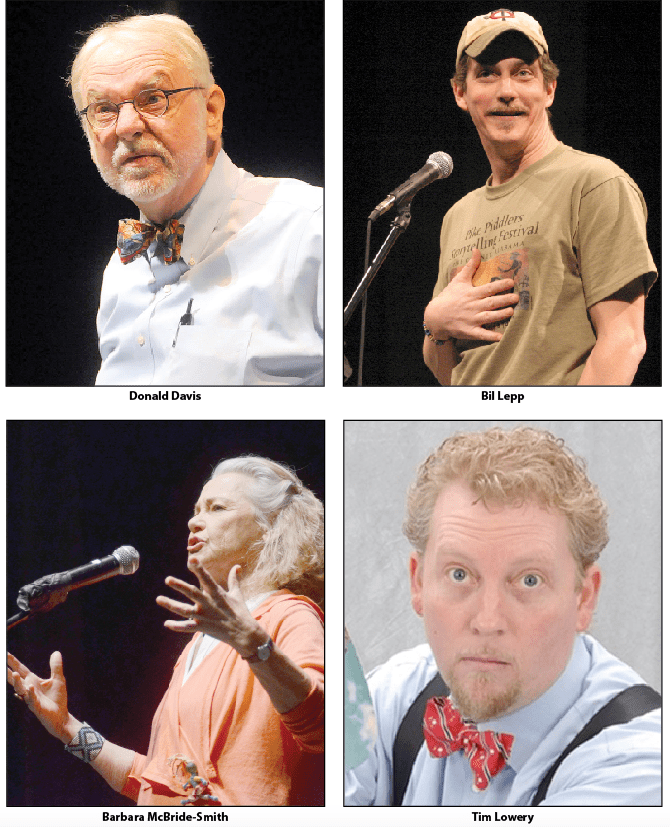 The 16th Annual Pike Piddlers Storytelling Festival is set for January 27 at the We Piddle Around Theater in Brundidge and January 28 at the Troy Center Theater on the campus of Troy University.

Donald Davis is the Dean of Storytelling.

Mernette Bray is a member of the Pike PIddlers Storytelling Festival committee that is sponsored each year by the Brundidge Historical Society.

When the BHS decided to expand the folklife events at the We Piddle Around Theater, they decided to add storytelling to the calendar.

“We knew about Kathryn Tucker Windham, Alabama’s storyteller” and several of us had attended her festival in  Selma,” Bray said. “As we looked at the art of storytelling and the tellers, the name Donald Davis kept coming up.”

Members of the BHS storytelling committee ventured to the National Storytelling Festival in Jonesborough, Tennessee in 2004. Donald Davis was there.

“Those who went came back with Donald Davis on their mind,” Bray said. “The sold out, thousand-seat tent was packed to hear him and people stood four deep all around the tent in drizzling rain to hear him, including us.”

Bray said the committee members came home and said, a storytelling festival in the town of 2,000 couldn’t miss with Donald Davis.

There is a long story about how it happened that Donald Davis happened to be a teller at the first Pike Piddlers Storytelling Festival in 2007. He has been “piddlin’ around” at the Pike County storytelling festival every year since, with the exception of a COVID year. In 2022, the storytelling festival had to be canceled but Donald Davis came anyway. He did a one-night concert at the We Piddle Around Theater so the festival year would not be a wash.

“Donald Davis will be back with us this year and joining him will be Barbara McBride-Smith, Bil Lepp and Tim Lowry who have been just as committee and dedicated to a storytelling festival in, as Sheila Kay Adams once said, in the backside of nowhere.”

Bray said the members of the storytelling committee just happened to be enjoying a teller in a nearby National Storytelling Festival tent. The tent across the way was rocking with hooting laughter.

“Who is that?” we asked each other,” Bray said. “One of us slipped out and over and peeped in to see who it was. She came back and said that he’s young; he’s funny; and we’ve got to get him. Of course, it was Bil Lepp, who Barbara McBride Smith said is known as the Wonder Bra of storytelling. He takes something small and insignificant and pushes it up into something really big and mighty interesting.

Growing up in a family where the truth was fluid, Bil Lepp said he became adept at spinning tales and exaggerating circumstances at an early age. He has become a nationally renowned storyteller and is a five -time champion of the West Virginia Liars’ Contest,

Bil Lepp’s outrageous, humorous tall-tales and witty stories have earned the appreciation of listeners of all ages and from all walks of life. Though a champion liar, Bil Lepp’s stories often contain morsels of truth which shed light on universal themes, perhaps, a hunting trip, a funeral, or a visit to the dentist. Bil Lepp can find the humor in any situation and he readily shares it.

“My stories may not be completely true, but they are always honest,”  Lepp said.

With her incurable Waco drawl, feminist sympathies, and cheerleader’s do-right attitude, Barbara McBride-Smith spins stories as they have never been told before.

“Form the fist time she stepped on stage at the We Piddle Around Theater, Barbara McBride-Smith has been a favorite  “piddler” around these parts,” said Bray “She has made us laugh with her re-telling of the creation of Mother Earth and her preparations for her annual mammogram. She has made us misty-eyed with her heart’s  goodbye to  Ricky Nelson. She is like us. She even eats fatback and tomato gravy. Barbara McBride-Smith is an amazing storyteller and we are excited to have her back.”

Tim Lowry is, perhaps, the men’s answer to the Texas-born, Tennessee transplant. He’s Southern born and  Southern bred and it shows.

“He told a story about a chance visit to a church in South Carolina,” Bray said. “We laughed until we cried and then got his message that we are all God’s children and should live in peace and harmony here on the Earth He crated for all of us.”