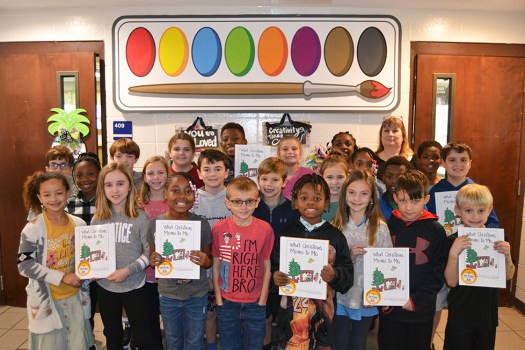 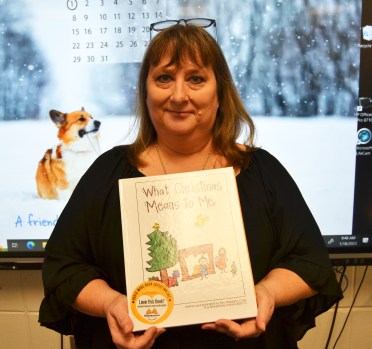 Napper’s class wrote and illustrated “What Christmas Means To Me.” 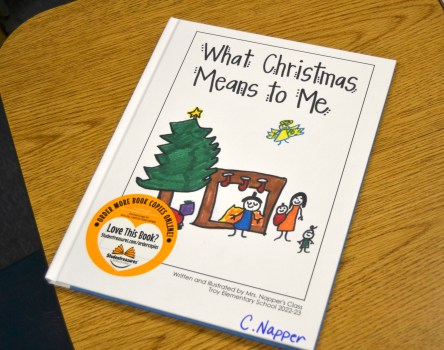 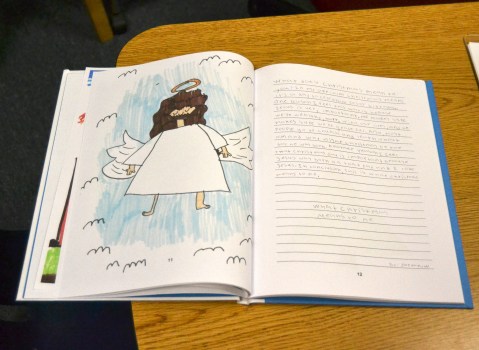 Christmas is a special time for many children and Cathy Napper’s third grade Troy Elementary class published just exactly what Christmas means to each of them.

Napper’s class received their published book, “What Christmas Means To Me,” this week after more than a month of the class working on the project.

“They were so excited when they saw me bring the box in yesterday and I told them that their books were published,” Napper said. “I think it turned out really good. I was really nervous in the beginning because I’ve never done this before in my 24 years of teaching. I’ve always believed in kids and their writing and them expressing themselves, though, so I think it turned out great.” 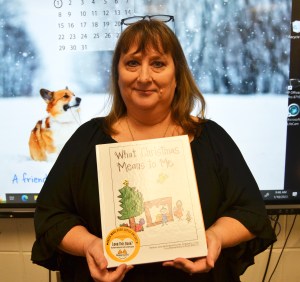 Napper’s class wrote and illustrated “What Christmas Means To Me.”

The idea came when TES Counselor Amy Brown suggested Napper’s class publish a book through the StudentTreasures Publishing program, which is a free kit for teachers to use to publish a book. Each student in Napper’s class got the opportunity to write what Christmas meant to them and provide an illustration to accompany the letter.

“Me getting to see them express themselves in the book with their illustrations and words meant a lot to me,” Napper emphasized.

“I think it turned out great,” Brown said. “I was very surprised to see the quality of the book when she brought it over. Looking through some of the writings, it was very touching to see what is in some of the hearts of these children and what’s most important to them.

“It’s not just gifts; it’s family and religion and everything that means a lot to them. You can tell they put a lot of work into their illustrations and their minds are very creative.”

Third grade student Destiny Polland said that while she was nervous about the project, she also enjoyed it.

“It was fun. I felt excited but also nervous because I didn’t know who would read it or if we would get to read it,” she said. “I felt amazed when I saw the book. We got to pick our own pages, make our own drawings and write our own letters. I loved it.” 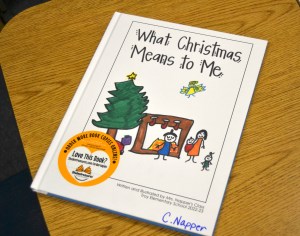 “I felt pretty nervous but good about doing it, because I got to show everybody how much I love Christmas and how I got to spend time with my family and how I loved that,” Sumrall said. “I felt really good because I love how it turned out and we all tried really hard and worked really hard on it in class.”

Third grader Jake Hitchcock described the experience of writing his letter as “nervous and exciting” but said that he loved the writing and most importantly, “felt like I accomplished something” at the end of it. Classmate Kennedy Bell was proud to see the way the book came out, as well.

“I loved everyone’s pictures,” she said with a smile. “I felt like my writing was okay, my handwriting was okay, too. I had a few corrections but I fixed that and the final product was really good.

“I liked all my friends’ writings and all the other kids. I really loved and enjoyed everybody’s writings and drawings. The book was really fun to do.”

Napper and Brown both agreed that it’s important that today’s students are able to express themselves and writing remains one of the best ways to do so, especially in today’s world of technology.

“Kids today are very much technology oriented,” Brown said. “They are very familiar with technology and it’s easy for them to get lost in the digital world. So, it’s important that they can still communicate. 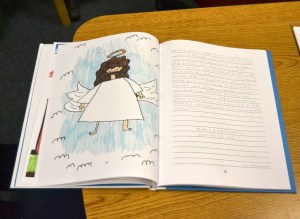 While Napper said it was a lot of work, it’s a project she plans to do in the future.

“It was a lot of work but we will definitely do it again,” she said. “I don’t know if it’s something we’ll do every year but I definitely intend on doing it again before I retire.”